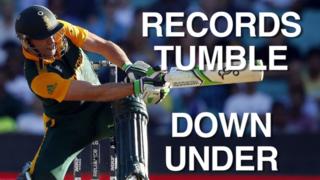 BBC Sport looks at the key stats from the 2015 Cricket World Cup so far, as tournament records are broken during the pool stage in Australia and New Zealand.

The quarter-finals begin on Wednesday morning as De Villiers' side take on Sri Lanka in Sydney.

'She completely lost it after that Solheim'