It is enough to make bowlers pack up their boots and take the first flight home.

If it's not Chris Gayle heaving over the leg side, it's Brendon McCullum charging down the pitch and flat-batting through the covers. If it's not Kumar Sangakkara torturing fielders like a sadistic surgeon, it's AB de Villiers sweeping fast bowlers for six - with one hand.

The 2015 World Cup has been the most run-thirsty of all time: record scores, more sixes and more centuries than ever before. Fielders have become spectators and spectators have become fielders.

Why is the bat so dominant? Why are bowlers so powerless? And does a run-fest actually make good cricket?

In case you need proof, the statistics provide conclusive evidence that this World Cup in Australia and New Zealand has been all about the batsmen.

Much is made of the advantages given to batsmen - better bats, smaller boundaries, pitches that encourage dazzling strokeplay.

But the increase in runs is most often attributed to the 2012 change in ODI playing conditions. Whereas teams were once allowed five fielders outside the 30-yard circle, they can now have only four.

"If you have one less man outside the ring, batters are targeting where the gap is," Ireland batsman Ed Joyce told BBC Sport.

"The skill level of the batters is exceptionally good and they are making bowlers bowl differently. When bowlers do something they don't want to do, they don't do it as well."

However, the change in regulations does not fully explain the heavy scoring, because batsmen are only just taking full advantage.

With Twenty20 now more than 10 years old and fully embedded into a batsman's psyche, are we seeing the shortest form of the game finally impose a total influence on 50-over cricket?

"They have taken it to a new level with so many shots, the ability to score through 360 degrees. They have the confidence to play them in any game." 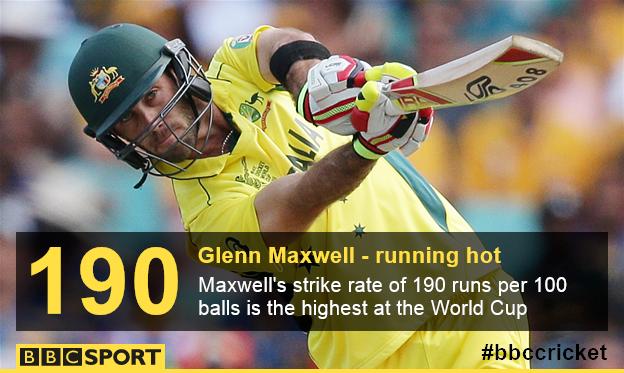 Have batsmen drunk the bar dry or is there an inexhaustible supply of runs to be lapped up? The facts provide no optimism for bowlers.

This is the third successive World Cup where the average runs per over and the number of totals in excess of 300 have both increased.

The records for the fastest fifty, century and 150 have all been broken in 2015 and all five individual scores of 200 have come since 2010. Rohit Sharma's record score of 264, made against Sri Lanka last year, hinted that an ODI triple century is possible.

"At the moment, who knows? We are seeing so many different shots with so much power," said Australia captain Michael Clarke.

"Someone like David Warner, Chris Gayle or AB de Villiers - on a smaller ground they possibly could make 300."

The good news - if you can call it that - for bowlers is that the record for the highest team total in ODIs is yet to be threatened. Although this World Cup has seen three scores in excess of 400, Sri Lanka's record of 443-9, made against the Netherlands, has stood since 2006.

Still, there are those who believe 500 is within reach.

"There's a very good chance that a team could get 500, especially on a small ground," said Joyce. "The way batsmen play without fear, it's incredibly difficult to stop them scoring."

What can bowlers do about it?

At the moment, not a great deal.

Even a rule change that was thought likely to help bowlers has gone the other way. Using two balls, one at each end, was supposed to offer more assistance, but instead keeps the balls harder for longer so they travel further and faster off the bat.

"It's always tough to be a bowler. All the rules are against us," said South Africa pace bowler Dale Steyn.

"We're starting to realise if bowlers can go for between eight runs and 10 an over in the last 10, you're actually doing a pretty good job."

Those who have made the ball swing - the likes of Australia's Mitchell Starc and New Zealand pair Tim Southee and Trent Boult - have had success, but how do bowlers curb scoring when there is no assistance, particularly in the final overs of an innings?

"There are different theories - bowl short to use the square fielders - but I still feel the yorker is the best ball," said Pakistan coach Waqar Younis.

"I'm glad I'm not playing, because it is unfair to bowlers." 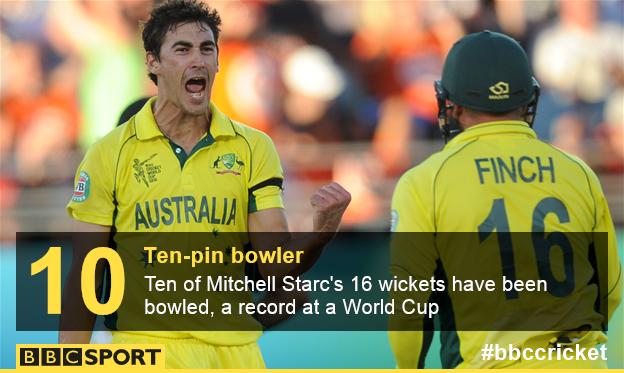 Seeing the ball constantly flayed to the boundary might be entertaining for some, but it makes for one-sided contests in more ways than one. Not only is the ball struggling to compete with the bat, but a huge first-innings total often means the game is over by the halfway stage.

Of the 20 completed World Cup games in Australia, 14 have been won by the side batting first. On the 20 occasions across the whole tournament that a team have posted in excess of 300, the side batting second have won only three times.

"A massive first-innings score kills the game," said BBC cricket correspondent Jonathan Agnew. "The team batting second is under so much pressure that they feel they have to go hard all the way through. They lose early wickets, then the game is gone."

In contrast, some of the most thrilling matches have been low-scoring. New Zealand chased Australia's 151 to win by one wicket, the same for Afghanistan as they overhauled Scotland's 210.

"The world wants entertainment, fours and big sixes," said Waqar. "Weighting the game in favour of the batsmen is a crowd-pulling thing, but it should be an even contest."

What does it mean for Test cricket?

The speed of Test run scoring has been increasing for some time. Of the seven completed Test innings with a run-rate above five per over, only three happened between 1902 and 2005, but four have come since 2012.

The very best batsmen - the likes of De Villiers and Sangakkara - are always best placed to have success across all forms of the game, but players like Australia's Warner, who made his name in limited-overs cricket, are transferring to the Test arena.

However, Tests will always provide a fairer battle between bat and ball: no boundary fielding restrictions, red leather more likely to swing, and pitches that deteriorate over five days.

"ODIs are so weighted in favour of the batters, but Test cricket is completely different," said Joyce.

"The Test mindset is different. There's been some increase in Test scoring, but I don't see any reason why it would get to the level of ODIs."