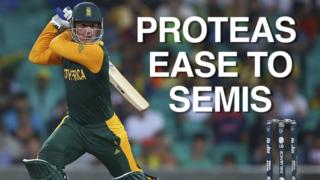 BBC Sport takes a look at some of the key facts and figures from the 2015 Cricket World Cup as South Africa reach the semi-finals with an easy first ever knockout win over Sri Lanka by nine wickets.

South Africa off-spinner Jean-Paul Duminy (3-29) took the second hat-trick of this World Cup, after England's Steven Finn against Australia, as the Proteas went on to win with a record 32 overs to spare.

Sri Lanka's Kumar Sangakkara (45) bowed out of ODIs as the seventh player to make 500 runs in a World Cup.