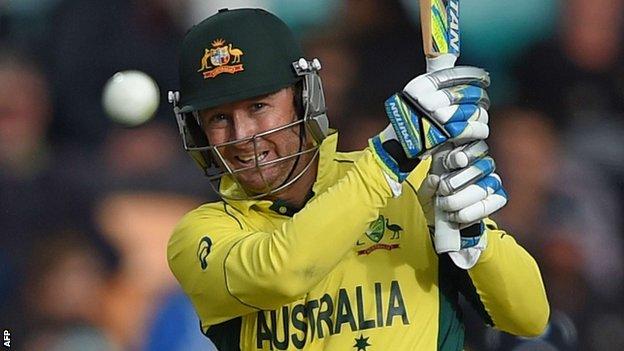 Australia captain Michael Clarke says he has no intention of retiring from one-day cricket after the World Cup.

The 33-year-old has a long-term back problem and has also recently struggled with hamstring injuries.

But on the eve of his side's quarter-final clash with Pakistan, he has dismissed suggestions these could soon force him to quit the 50-over game.

"I have played over 200 one-dayers and over 100 Test matches so it hasn't stopped me to date," said Clarke.

"I don't think it will do after this series either."

After missing Australia's opening World Cup victory over England, Clarke has forced his way into the side, helping them to victories over Afghanistan, Sri Lanka and Scotland, with scores of 68 and 47 against the last two respectively.

This helped the co-hosts seal second place in Pool A and set up the last eight encounter with Pakistan.

"A lot of players have had injuries throughout their career and worked their backsides off to get back out on the park," said Clarke.

"Walking back out on the field to represent your country is a very special feeling.

"But if you don't perform you don't get that opportunity. I'm fortunate to be back out on the park and I need to make sure I'm performing and leading the way as captain of this team."

Pace to decide the match?

Australia face a rejuvenated Pakistan side on Friday at the Adelaide Oval.

Misbah-ul-Haq's side began the tournament with back-to-back defeats by India and West Indies but have since won four in a row to reach the last eight.

Clarke is not underestimating his opponents and believes the match could be decided by the performance of each side's respective pace bowlers: Mitchell Starc, Mitchell Johnson and Pat Cummins for Australia and Sohail Khan, Rahat Ali and Wahab Riaz for Pakistan.

"I think Pakistan have been underrated for a long time, especially in the shorter form of the game," added Clarke. "I think they've got a lot of talent, and are well led. Pakistan have some really good quicks in their attack, and they've shown that throughout the series.

"I think fast bowling will play a big part tomorrow, especially if I leave that grass on the wicket like there is now, fingers crossed."

Pakistan skipper Misbah believes his side are gathering momentum and have no fear of the four-time champions.

"They are favourites, but there is no hard and fast rule that favourites are always going to win the game," said Misbah. "We've got a bowling line-up which can really go through any team, and a few batters just getting back into form.

"It's not like that if you go with a defensive approach against Australia.''

What do the stats say?