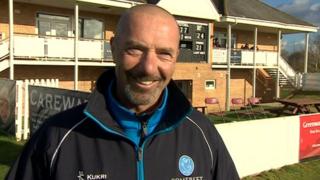 Gayle has agreed to play up to six games for the Taunton side, in between his commitments with the Indian Premier League and Caribbean T20.

The 35-year-old has hit 13 centuries in Twenty20 cricket and last month became the first man to score a double hundred in a World Cup game, when he made 215 off 147 balls against Zimbabwe in Canberra.