Chris Gayle has the potential to break T20 Blast records during his stint at Somerset this summer, according to director of cricket Matthew Maynard.

The West Indies batsman, 35, is set to arrive in Taunton in May and will play at least five games for the county.

He holds the record for the highest score in a T20 innings, after hitting 175 for Royal Challengers Bangalore in the Indian Premier League in 2013.

"Just the mention of his name puts a smile on people's faces and it gives you that excitement, with the thrill of what he can deliver."

Gayle's total of 6,975 runs in the game's shortest format is a record and he is the only player to have a Test triple century, a 50-over double century and T20 hundred to his name. 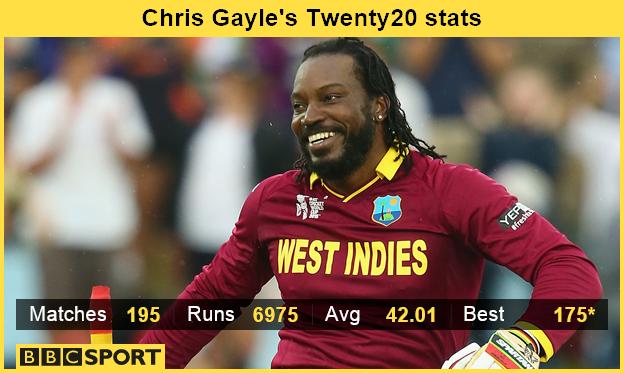 "I've seen a couple of things saying we could see the first ever 300 in the T20," continued Maynard. "It is that type of wicket [at Taunton] and if Gayle gets in we could potentially see the first double hundred.

"He's already had a 175 in that form of the game. It would be incredible to see him beat that."

Gayle turned down the chance to join Somerset in 2012 because of international commitments, but he has now signed a deal with them to play in between spells in the IPL and Caribbean Premier League.

He is expected to stay for a month, but Maynard said he could also be available if Somerset reach the knockout stages of the T20 competition.

And when asked if Gayle could return for future stints, the former Glamorgan and England batsman replied: "It's difficult to say at the moment but once he's become a Somerset player, I'm sure he'll wish to return and come back time and time again.

"We'll just have to see what comes up."