Matthew Hoggard admits he was "surprised" to be named England's best Test bowler in a special study devised and commissioned by BBC Sport.

The 38-year-old, who took 248 Test wickets, finished top after a formula was applied to determine which of the 10 leading England wicket-takers had taken more of their wickets against better batsmen.

"I was very surprised," said Hoggard. "There were some fantastic bowlers in the top 10 but it's given me plenty of bragging rights."

With James Anderson just four wickets away from replacing Botham as England's all-time leading Test wicket-taker, BBC Sport asked Test Match Special statistician Andrew Samson to take the top 10 England Test wicket-takers of all time and give every single one of their wickets a numerical rating between one and 11 based on the career average of the batsman they dismissed.

"I haven't really sat back and looked at stats - I still haven't watched the 2005 Ashes DVD," said Hoggard. "There's a lot of time to do that when I'm a lot older and have my grandson on my knee while smoking a pipe.

"Opening the bowling with a swinging ball, you had a good chance of getting early wickets. It's no surprise I did well against the top order."

Hoggard played the last of his 67 Tests in 2008 and retired from county cricket in 2013, and he says his role in the team was to build pressure rather than being an out and out strike bowler.

"My game plan didn't change from number one to number 11. There might have been a little more aggression towards number 11 because I could bounce them and feel quick and good about myself but it's exactly the same ball which would get the wickets.

"For me, the best I played with would be Flintoff. On his day he was devastating - just like Steve Harmison and Simon Jones could be."

And what about Hoggard's best performances in an England shirt? He took seven five-wicket hauls, but rates the one he recorded against South Africa at the beginning of 2005 as his personal highlight.

"My best bowling was most probably the second innings at Johannesburg," said Hoggard. "I took 7-61 and 12 in the game.

"I got 5-144 in the first innings and I thought I'd bowled like a bag of spanners.

"It was always a friendly pitch - they called it the green mamba in South Africa - but I'd never bowled well on it until this day.

"It seemed to click in the second innings. I got Jacques Kallis first ball and to bowl South Africa out in 70 overs was fantastic." 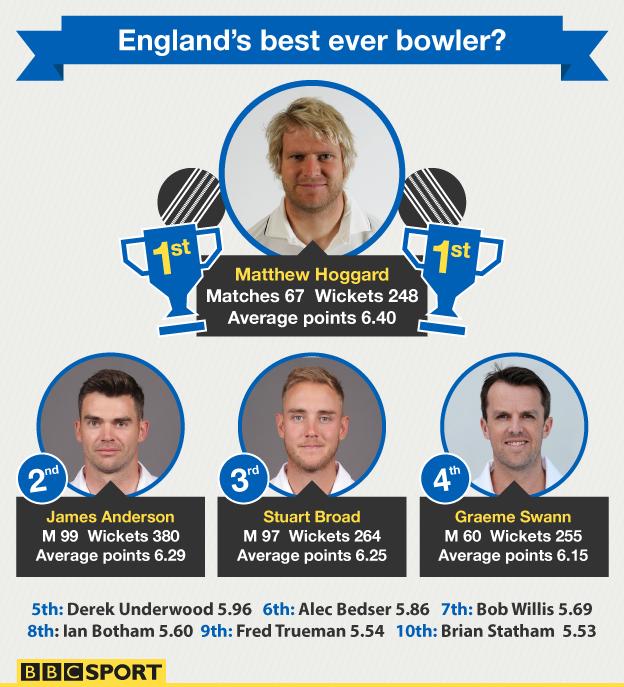