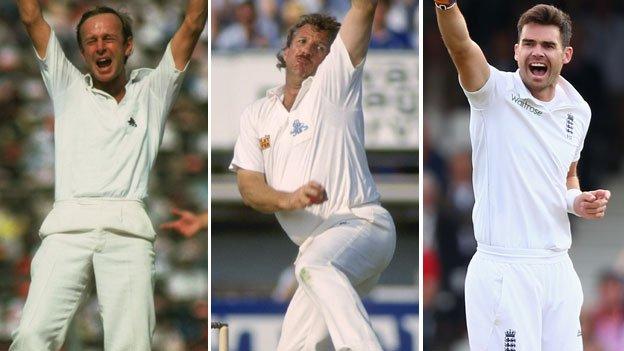 Who is England's best-ever bowler in Test cricket?

Is it Fred Trueman, who terrified batsmen on the uncovered pitches of the 1950s and '60s? Or is Sir Ian Botham a cut above the rest?

Perhaps the best is still playing? There are not many batsmen who can cope when James Anderson is swinging the ball around.

With Anderson overtaking Botham as England's all-time leading Test wicket-taker, BBC Sport devised a formula that attempts to reflect accurately each bowler's ability to get the best opposition batsmen out.

We asked Test Match Special statistician Andrew Samson to take the top 10 England Test wicket-takers and give each of their wickets a numerical rating between one and 11 based on the career average of the batsmen they dismissed.

A batsman with an average of 55 or more would be worth 11 points, between 50 and 55 would be 10 points, and so on down to a batsman with a career average of 0-5, worth only one point. Those numerical ratings were added up and divided by the number of wickets taken.

The full breakdown of how each bowler fared under this formula can be found below. But who came out on top? 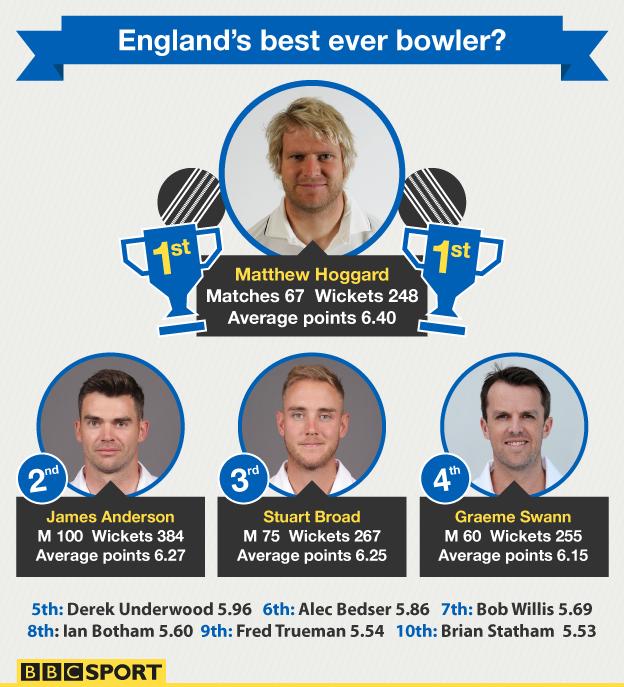 Matthew Hoggard? The best ever?

It may be a surprise to most, but the shaggy-haired Yorkshire seamer knew how to get good batsmen out.

Hoggard, 38, was one of the unsung heroes of the 2005 Ashes, when he helped England reclaim the urn from Australia after an 18-year wait.

Of his 248 Test victims, 28% had a career batting average of more than 45. In comparison, only 10% of Botham's wickets were those of batsmen who averaged more than 45, while Anderson was just behind Hoggard on 27%.

No other bowler dismissed Tendulkar, the highest run-scorer in Test history, more than Anderson. He has taken more wickets (14) of players with an average over 55 - Sri Lankan Kumar Sangakkara (seven times) and South African Jacques Kallis (seven) - than anyone else in the top 10.

However, 7% of his victims averaged below 10, compared with Hoggard's 5%, which also contributed to him finishing behind Hoggard in the study.

'The bowler I would have liked to have been'

Perhaps we shouldn't be too surprised. Four of the five batsmen Hoggard dismissed the most - India's Virender Sehwag (six times), Australian Matthew Hayden (six), West Indies opener Chris Gayle (five) and India's Rahul Dravid (five) - were among the most influential batsmen of his era.

"Hoggard was brilliant, a fine new-ball bowler, the bowler I would have liked to have been," says BBC cricket correspondent Jonathan Agnew. "He was accurate, he kept going and bowled a lot of overs. He would very rarely bowl a bad ball. He just plugged away, ball after ball, uphill or into the wind, which sometimes helped him swing it.

"He bowled full and pretty straight, and was very effective against left-handers with big movement in. He wasn't the quickest, but he was effective. It was all to do with length and that swing away from right-handers, and into the left-handers. That's what made him a danger."

Perhaps his most memorable contribution during the 2005 Ashes came in the fourth Test at Trent Bridge. He ended a potentially match-winning century partnership in the second innings by getting right-hander Clarke to edge one behind that nipped away. Four overs later, he swung the ball into the pads of the left-handed Gilchrist to expose the tail.

England eventually reached their winning target of 129 in a nervy chase.

'I'd pitch it up and hope they nicked it'

When BBC Sport presented Hoggard with the study's findings, he was surprised - but quickly joked he would savour the "bragging rights" over Anderson and fellow Yorkshireman Darren Gough (12th on England's all-time list with 229 wickets).

Leeds-born Hoggard made his England Test debut against West Indies at Lord's in 2000 and played his 67th and final Test against New Zealand in Hamilton in 2008. Of his 248 victims, he took the most against Sri Lanka (37), India (36) and Australia (35).

He became a key component of the England attack under the captaincy of Yorkshire team-mate Michael Vaughan, culminating in that famous Ashes victory. His reliable swing complemented the pace, height and bounce provided by Steve Harmison, Simon Jones and Andrew Flintoff.

"When Michael took over as England captain, he said to me I should be on the shop floor sweeping up after the likes of Harmison, Jones and Flintoff," said Hoggard. "They got the headlines and my job was to control the game.

"I tried to bowl as many maidens as I could. I'd pitch it up and hope they nicked it, or if they were left-handed they would be bowled or out lbw. I had to pitch the ball a little further up because at my pace, if you were a little shorter, I used to disappear over the boundary."

Vaughan remembers the bustling fast-medium bowler as "easy" to captain, if at times a little "grumpy".

"He wasn't used other than when the ball was nipping around with the new cherry, or when the lacquer had gone and it was swinging," said Vaughan, who led England between 2003 and 2008. "We used him at the right time."

All down to good planning then? Er...

Hoggard was perceived as a captain's dream because of his ability to get key wickets and bowl to a plan. So how much did the modern method of analysing opponents on video help his game?

"We'd sit down before the series and discuss what a batsman's weaknesses were, but I was a firm believer that you just bowl your best ball," said Hoggard.

"I remember getting Virender Sehwag out in India where I tried to bowl an outswinger and the seam went down like an outswinger but nipped back and bowled him. All the analysts on TV were saying I was fantastic, but to be honest it was a freak of nature. Because I put it in the right area, I got the rewards."

Hoggard says his plans never changed, whether he was bowling to an opener or a number 11. If his stats confirm he was particularly effective against some of the best batsmen, it took him time to feel at home in the Test arena.

"It was a big challenge playing against the greats of modern-day cricket," he said. "I bowled to the likes of Tendulkar, Brian Lara, Ricky Ponting, Sangakkara, Kallis, Mahela Jayawardene, Dravid.

"I had nightmares against Hayden. It's nice to see I got him out six times. When I first came across him in 2001-02, he was coming off the back of breaking the world record (380 against Zimbabwe) and he scored back-to-back hundreds against us.

"I didn't have a clue where to bowl. He was hitting my best balls for four. He was a big person anyway, but standing 22 yards away he looked massive. He seemed to get bigger and bigger.

"It was hard to go from him being a left-hander who smacked me all over the place and gave me nightmares to adjusting my technique, coming back and getting the best of him. That was a fantastic achievement."

But what about Jimmy and Beefy?

Speaking about Anderson's swing bowling last summer, Botham said: "It's great to watch, it's great entertainment and it's an art - it really is. He's terrific, he's mastered the skills. He's worked hard to be that good."

But could Anderson, who came a close second in our study, and now stands alone as England's highest Test wicket-taker, have been even more successful?

"If we have a criticism of Anderson - and it's difficult because he is such a fantastic cricketer - he could have taken even more wickets if he'd pitched it up a bit more," says cricket analyst Simon Hughes.

Botham, widely regarded as England's greatest all-rounder, took 383 Test wickets and also weighed in with 5,200 runs, but only came eighth in our study.

As well as his low percentage of victims with a high average, 28% of the batsmen he dismissed averaged below 20, compared to 22% for Hoggard.

"Botham got a lot of tail-enders out," reflects Agnew, who played three Tests for England, sharing the new ball with Botham in two of them.

"He was quicker than people think. When he was at his best, slim and fit, he bowled fast outswingers. He bowled with a lot of hostility at tail-enders - bouncers, wanting to blow them over. He was such a big presence that he was no match for lower-order batsmen.

"He had a bit of a golden arm. He used to get batsmen caught in the covers, caught at mid-wicket, caught hooking. He just had a knack of getting people out.

"He never thought the game was up. He had total belief in his own ability, which is what makes great sportsmen stand out."

According to former England captain Raymond Illingworth, his Yorkshire team-mate was the best bowler of the lot - marginally better than Brian Statham and Alec Bedser.

"Fred could put fear into a batsman's heart," says Illingworth. "He didn't sledge like they do nowadays. He would just spend more of his time in the opposition dressing room than ours. He would go over to an opposition youngster and say: 'I've not seen you before, can you hook? You'll get a chance to show us today.' To a 19-year-old, he was frightening."

Illingworth believes Bedser, who took 236 Test wickets, was the perfect exponent of swing and credits the Surrey man with inventing the leg-cutter.

Statham was more a "brilliantly accurate" bowler who very rarely bowled a bouncer. So rare in fact, Illingworth can remember the time he did.

"Brian only lost his rag once," he recalled. "It was against West Indies in 1959 and one of their batsmen, Easton McMorris, didn't walk when caught behind. Brian was furious and he gave him a tough time, hitting him under the heart three times. I think McMorris ended up being carried off."

While no formula will be perfect, there is a distinct generational split in the table - with modern-day bowlers such as Hoggard, Anderson, Graeme Swann and Stuart Broad ranking higher than Botham, Trueman and Statham.

Batting averages are generally higher in the modern era, pitches are better and boundaries smaller. Bats are also bigger and Twenty20 has opened up new scoring shots for batsmen. That has clearly had a bearing on the result of this study.

"I don't think batsmen have got better," argues Hughes, who took 466 first-class wickets in a 13-year career. "In the 1980s, there were some fantastic batsmen around but there were fewer in that era who averaged more than 50. Now, you'll get 10 batsmen, maybe more, averaging 50.

"Take Michael Atherton, who was a fantastic batsman. Like anyone he had technical flaws but he was as good as it got in terms of technique and determination. But he averaged 37 in Test cricket because he played in that 1990s-2000s era where all the bowlers were very good and the pitches weren't great."

So have we found England's best bowler?

No doubt the debate will continue - and we welcome your thoughts in the comments section below.

Chances are it depends on who you ask, how old they are, and their own experiences of either playing with, or watching, the main contenders.

Hughes nominated left-arm spinner Derek Underwood (297 wickets in 86 Tests), saying: "Deadly was amazingly consistent and reliable, he never bowled badly - conceding only 2.1 an over - and was invariably dangerous when the conditions were in his favour."

Hoggard believes the best he saw was Flintoff (219 wickets in 78 Tests), while Illingworth went for Trueman. The man who crunched the numbers, Andrew Samson, nominated the "brilliant" Swann (255 in 60).