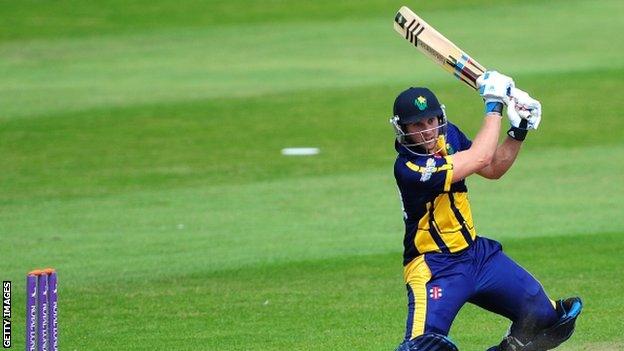 A century from Chris Cooke was Glamorgan's highlight as they dominated the final day against Cardiff MCCU.

The match ended in a draw with Glamorgan scoring 434 for seven and Cardiff MCCU 110 for eight.

Cooke hit 112 off 147 balls while David Lloyd chipped in with 42 not out before Glamorgan's lunchtime declaration.

Glamorgan begin their county championship campaign at Leicester next Sunday.

The only disappointment for Glamorgan wicket-keeper Mark Wallace failing to reach the 10,000 first class runs landmark.

"It's very nice to get off to a good start against the students after we've put in a lot of hard work, but the real test is against Leicester" said top scorer Cooke, who has spent much of the British winter playing club cricket in South Africa.

"They (the wickets there) are a bit different but I came straight back onto the practice wickets here and it only takes a session or two to get used to it."

Cooke laughed off any suggestion he could give any advice on acclimatising to new recruit Colin Ingram, who was the top scorer in South African domestic cricket over the season.

"He's scoring bucket loads of runs and he's a world-class player, so I think he's going to find it pretty easy," Cooke added.

"Let's hope he's got some runs left in the locker, and there'll be a bit of Afrikaans chatter in the slips as well."