Glamorgan's county championship campaign starts with a visit to Leicestershire on Sunday in the only fixture of the season that will see them face a team that finished below them in the 2014 table.

Since a brief dalliance with the First Division in 2005, Glamorgan have been stuck with the also-rans in cricket's second-tier and only once in that decade have threatened to join the top flight.

In 2010 they finished third - pipped to promotion by just five points by Worcestershire.

That blip aside, Glamorgan have barely troubled the top half of the table, and in the past two seasons have finished next to bottom.

The club also has financial problems, and has been facing debts of up to £16 million.

So it's against that background that head coach Toby Radford says four-day form has to improve.

"I'd say if we finish top four in the championship we'd have done pretty well," said the former West Indies batting coach who took over from Matthew Mott in October 2013.

Critics might point out that is a modest ambition, but it would require a substantial improvement on three wins in 16 four-day matches that saw them finish eighth in 2014.

Incidentally the same record as the club achieved in 2013 and 2012. Consistency is not always a good thing - even in cricket.

Radford is going to have to achieve his goal with 15 senior players, supplemented by trainees and players who are part of Cardiff's MCC-funded universities cricket academy.

"We have a good batch of talented young players," said Radford.

"Aneurin Donald is away with England under-19 in Australia, and there are several good young players linked with Cardiff MCCU. 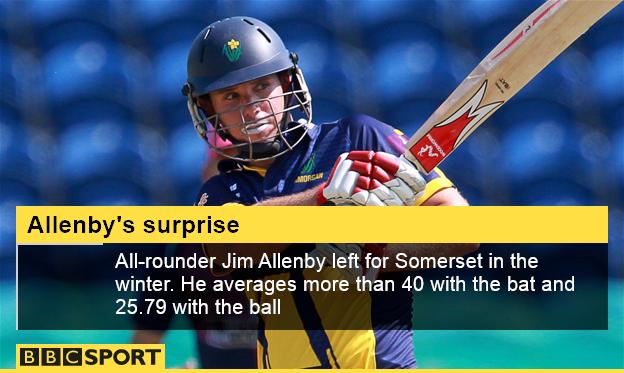 The small squad is also one shorn of its most consistent all-rounder.

Jim Allenby's decision to move to Somerset one year into a four-year contract at Glamorgan was the shock news of the autumn at the Swalec Stadium.

Allenby's ability with bat and ball will be difficult to replace, but Radford remains positive, particularly on the batting front.

Jacques Rudolph has been elevated to the captaincy and has been joined by fellow South African Colin Ingram, the leading scorer in his home country's domestic cricket over the winter.

"Will Bragg had an excellent start of last season and he's started well again in pre-season. That batting is looking very very solid, and I think we'll bat a lot further down the order than people expect."

Glamorgan's ability to bowl opponents out twice could depend the state of Michael Hogan's hamstring.

The Aussie pace bowler has not played since February and has undergone two scans on the injury since arriving in Cardiff. Radford remains hopeful the bowler will be in action some time in May.

Glamorgan have recruited Andy Carter from Nottinghamshire on a month's loan deal as cover Hogan, and Radford says any enforced absence would present the county's other seam bowlers with a chance to "prove that we're not a one-man band with the bowling attack."

As ever at Glamorgan, the talk of limited playing resources and disappointing performances is at odds with the venue for the interviews.

The 16,000-capacity Swalec Stadium will host the first Ashes Test from 8-12 July. It's impressive and modern and was expensive to build - and a prime reason for the club's limited playing staff. 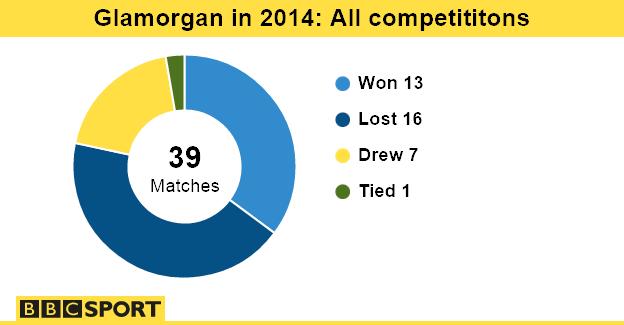 Glamorgan have been unable to pay off the debt accrued during the development of the ground, and are awaiting the outcome of a challenge to Cardiff council's decision to write off £4.4m of the £6.4m it is owed by the club.

They have already agreed similar deals with Allied Irish Bank and former club chairman Paul Russell. In total, the club had debts of more than £16m

Chief executive Hugh Morris has warned that the club could go out of business if the deal falls through, and says the financial constraints have had an impact on the the filed.

"We've had to pare back in certain areas and the playing staff is one," said Morris, who as a player scored 18,520 runs for the county.

"We've got a small staff this year of 15 players, most of the bigger counties have got 21,22 or 23 and that presents some challenges.

"But also it provides opportunities for some of our young players and I've been really impressed by some of the young players.

"I think they've got the ability to go on and do well and we have to provide them with the opportunity to do that."

He says that on the field the club's yardsticks are the New Zealand cricket and rugby union teams.

They have, he says, "small resources but pack a big punch."

The Black Caps were runners up in the 2015 World Cup and the All Blacks are the reigning world champions.

Morris says he sees Glamorgan's target in 2015 as reaching the finals day of the domestic Twenty20 tournament and the latter stages of the 50-over competition.

"The Championship performances have to improve, that's clear," he added.

On the face of it, that isn't too big a task, but it might be a strain on a small squad.