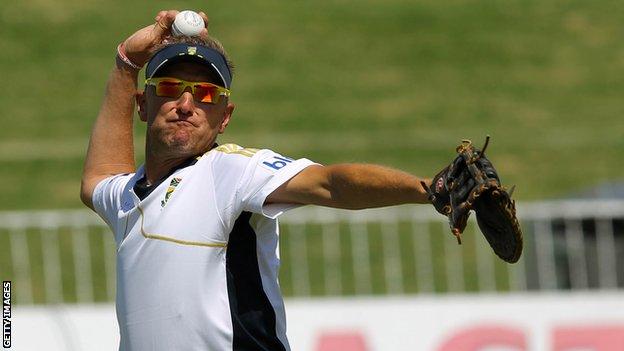 Allan Donald has stepped down as South Africa bowling coach after four successful years in the role.

The South African, a formidable fast bowler in his playing days, took over in June 2011 and helped the team become the top-ranked Test nation in 2012.

"I was blessed to have worked with the best bowling attack in the world over a four-year period and leave with fond memories and experiences," said Donald.

"It's never easy to lose a legend from your ranks but we respect Allan's decision in the knowledge that we will seek his involvement in our cricket programmes in the future," said Cricket South Africa (CSA) Chief Executive Haroon Lorgat.

South Africa's Dale Steyn is currently the world's top-ranked Test bowler, with Vernon Philander and Morne Morkel at seven and 11 respectively. Steyn, Morkel and spinner Imran Tahir are all in the one-day international top 10.

South Africa reached the semi-finals of the Cricket World Cup in March.

"I have had some time to reflect after the World Cup and have come to the conclusion that the time is right to move on," added Donald.

"The last four years have been the best of my life and being involved with the Proteas in the 2015 Cricket World Cup was a goal I had set my sights on."

Cricket South Africa said it would appoint a replacement in due course, with a Test and limited-overs tour of Bangladesh scheduled in July.