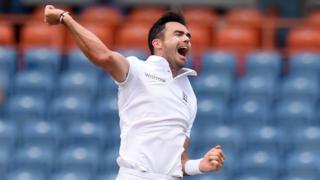 England captain Alastair Cook describes James Anderson as his country's "best bowler of all time" after a match-winning performance in the second Test against West Indies in Granada.

On a "tough wicket" the Lancashire bowler took four second-innings wicket and was involved in all six of the first-session dismissals that set up victory.

England first away Test win since December 2012 puts them 1-0 up in the three-match series with the final Test starting in Barbados on Friday.