John Hastings and Usman Arshad led a Durham fightback against Sussex on day two with a ninth-wicket stand of 116.

The pair helped the hosts recover from 222-8, after they lost three wickets in five balls, to post 339 all out - a first-innings advantage of four runs.

Hastings was the last man out for 72 off 86 balls, while Ajmal Shahzad and Ollie Robinson took four wickets each.

Resuming on 103-2, paceman Shahzad soon removed nightwatchman Rushworth, before Scott Borthwick (23) and Michael Richardson (37) steadied things with a partnership of 46, despite both being struck on the helmet.

After both fell having made starts, Durham then lost a cluster of wickets without adding a run. 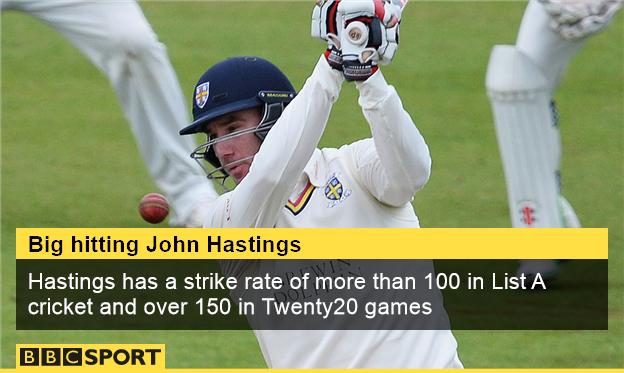 Shahzad (4-72) dismissed Calum MacLeod (22) and Paul Mustard for nought before Paul Collingwood edged Robinson (4-71), who scored a debut century on the opening day, to slip at the start of the next over as Durham collapsed from 222-5 to 222-8.

With Sussex looking like gaining a sizeable first-innings lead, Australian Hastings and Arshad took the attack to the bowlers as they raced to their hundred partnership in just 80 minutes off 121 balls.

However, the ever reliable Steve Magoffin returned to dismiss Arshad (35) and fellow countryman Hastings in consecutive overs.

Sussex captain Ed Joyce and Chris Nash then shared an opening stand of 55 before Joyce was trapped lbw by Rushworth for 30 and Nash edged the same bowler behind shortly after.

In-form Scotland batsman Machan took his average for the season to more than 85 as he remained unbeaten at stumps.

"The first session tomorrow is massive for both sides. Big stands down the order in both first innings showed that you can score runs when the ball gets a bit softer.

"So for us it's crucial that we take wickets while the ball is still fairly hard in the next 20 overs.

"We wouldn't want to chase more than 250 in the fourth innings."