Worcestershire paceman Charlie Morris took five wickets before Somerset fought back on the opening day of the County Championship game at New Road.

Morris took 5-71 and recalled all-rounder Joe Leach chipped in with 3-76 as Somerset were bowled out for 250.

Only James Hildreth and Craig Overton showed much resilience with the bat before both being dismissed for 41.

Lewis Gregory and veteran Alfonso Thomas then took a late wicket each as Worcestershire reached 35-2 at stumps.

Home skipper Daryl Mitchell's decision to bowl first looked to have paid off when Morris tempted Somerset captain Marcus Trescothick to edge behind to Ben Cox in just the fourth over of the day. 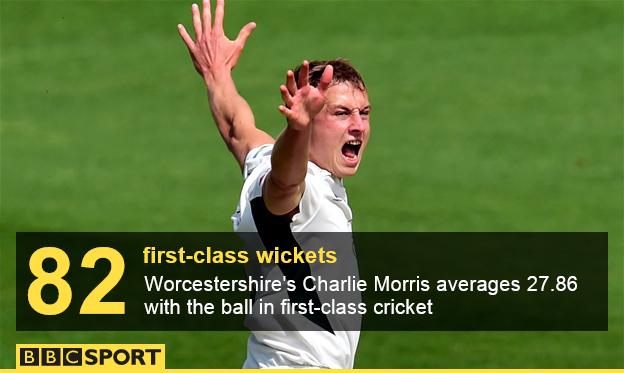 Morris then removed Johann Myburgh and Tom Cooper in the same fashion before taking his fourth wicket of the morning when Jim Allenby nicked the ball to Mitchell at second slip to leave Somerset wobbling on 71-4.

Hildreth, who already had 334 runs under his belt from his first two Championship games, steadied things with Alex Barrow (26) but both fell in successive overs after lunch as the visitors slumped to 134-6.

Overton helped Somerset past 200, striking seven fours and a six in his 56-ball innings, but Morris returned to dismiss him to pick up his first Division One five-wicket haul.

When Worcestershire replied, Richard Oliver was caught and bowled by Gregory before Tom Fell edged a lifting delivery from Thomas to slip, but captain Mitchell remained at the crease on 20 not out as the hosts closed 215 runs behind.

"It was fantastic to bowl Somerset out. It was doing a bit but I think it's a good cricket wicket.

"There's enough there if you get the ball in the right place, and certainly enough bounce and movement.

"Having said that, if you miss your line and length, it's a pretty true track."

"Looking at the pitch it seems quite good, but there has been lateral movement off the seam and it's a bit up and down.

"All in all, we'll take 250. It could be enough to work with. You always aim for 400 and maximum batting points but sometimes you have to adjust according to the wicket.

"Tomorrow could be a bit boring, bowling in the channels and not trying to do too much. Wickets will come."