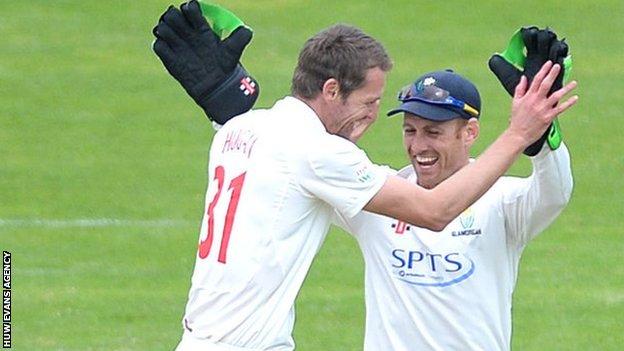 Fast bowler Michael Hogan is happy at taking his first Glamorgan wickets of 2015 after returning from injury.

Hogan took two for 43 in 17 overs at home against Derbyshire after recovering from a hamstring problem.

"I was a bit disappointed with the way I bowled, but happy to finish the day and get a couple of wickets," Hogan told BBC Wales Sport.

Glamorgan dismissed Derbyshire for just 205 with the hosts reaching 84 for two before bad light ended play.

"If we'd had a bit more time I would have played a second team game beforehand," said Hogan.

"I expected [signs of rustiness] but it was good to get a couple of wickets - probably not the best I've taken, but hopefully onwards and upwards."

Hogan acknowledged Derbyshire's batting collapsed as they lost their last six wickets for 33.

"But I thought we bowled really well, asked a lot of questions, tried to be quite aggressive and bowled a lot of short stuff testing them out," Hogan added.

He enjoyed bowling alongside Glamorgan's on-loan recruit from Nottinghamshire Andy Carter, who took four wickets in an innings for the third match in a row.

Carter has one more match scheduled in his current spell with the Welsh county.

"If both counties agree I'm sure we'd love to have him back, he's a workhorse for the team, he bowls a lot of overs and he's taking wickets," said Hogan.

But Glamorgan and Derbyshire could be condemned to spending more time in the pavilion with a poor weather forecast for days three and four.