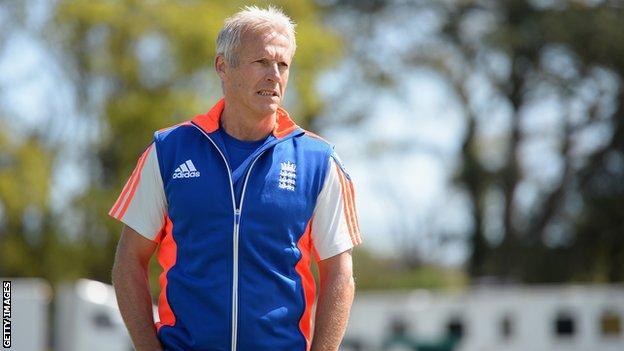 Coach Peter Moores was as "positive and bubbly" as ever in the England dressing-room despite reports he is about to be sacked, according to stand-in captain James Taylor.

The news broke one hour into England's rain-hit one-day international against Ireland in Dublin.

But Taylor said: "It definitely didn't affect anybody in the changing room."

Moores was appointed England coach for the second time in April 2014.

But after presiding over a disastrous World Cup campaign and a 1-1 Test series draw in West Indies, it appears his days are numbered.

At about 12:00 BST on Friday, with Moores watching from the England balcony, the Daily Mail,Guardian and Telegraph all put out reports stating that he would be relieved of his position next week when former England captain Strauss is expected to be confirmed as English cricket's new supremo.

Speaking later that afternoon, after the match was abandoned with Ireland on 56-4 from 18 overs, Taylor said: "I haven't heard anything on that.

"I haven't heard any echoes of that being the case. I know in my brief time with England over the last six months he's been really good for me, really positive.

Taylor said the former Lancashire coach behaved in his usual manner despite the reports circulating.

"He was excellent, just as consistent as ever, really positive and bubbly as ever," said Taylor.

"He's always a very positive man. He remains very level and consistent all the time, which is all you can ask for no matter what's going on.

"He's been great with me and all the guys here. All the fresh faces in the team, he's been brilliant with them."

Strauss had earlier pulled out of a commitment to commentate on the match in Dublin on Sky.

Meanwhile, Moores' agent Luke Sutton said on social media that his client "is a good man who doesn't deserve this" in reaction to Friday's reports. He later deleted the post.