The bowlers dominated the second day of the County Championship match between Sussex and Middlesex as 13 wickets fell to leave things evenly poised.

The hosts were bowled out for 192 just after lunch, a deficit of 77, as Ben Brown top scored with 46 off 54 balls and James Harris, fresh from his nine-wicket haul against Durham, took 3-79.

Middlesex reached 126-6 before a sea mist descended to bring an early close. 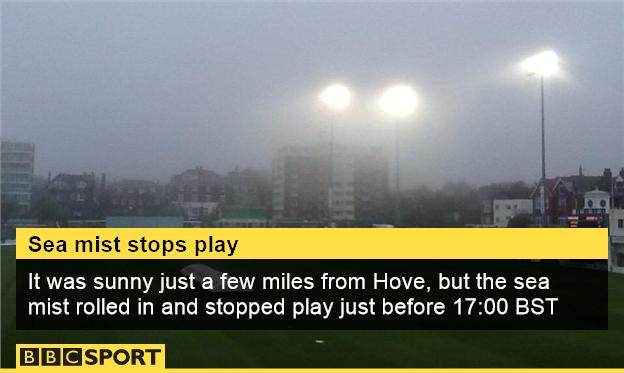 Once Wright was dismissed by Steven Finn, Australian Magoffin carried on his resistance with Brown at the other end, before he was removed by Harris for a 73-ball 25.

Wicketkeeper Brown then took the attack to the visiting bowlers striking eight fours, but was out four runs short of his half-century when he attempted to paddle Ollie Rayner and was caught behind.

Middlesex moved to 56-1 in their second innings but Sam Robson was bowled by Magoffin (2-24), Nick Compton was run out for 33 and James Franklin was out next ball, to pick up a pair, as they slumped to 68-4.

Neil Dexter and captain Adam Voges both fell to Robinson in the space of three balls, before the mist rolled in with 26 overs still to be bowled.

"It's been another intriguing day and I guess a good one for the neutrals with 13 wickets and some good batting. There are runs to be scored.

"Ben Brown and Luke Wright showed that if you are positive you can score quickly but we are probably behind the eight-ball a bit.

"Ajmal Shahzad's absence is a blow for us. He's got a grade one tear of his pectoral muscle in his right arm and will probably be out for five to six days.

"We just need to knock over their last four wickets tomorrow and see where that takes us. We have fought hard and we still feel we have a chance to win the game."

"We're over 200 ahead so we are in a strong position but we know Sussex will keep fighting hard, they are not a side that rolls over for anyone. But our seamers have bowled really well.

"Toby Roland-Jones is only just coming back after a shoulder injury but he gave us good control and was unlucky to only get two wickets.

"Hopefully they can do a good job for us again in Sussex's second innings and if I can contribute then great."