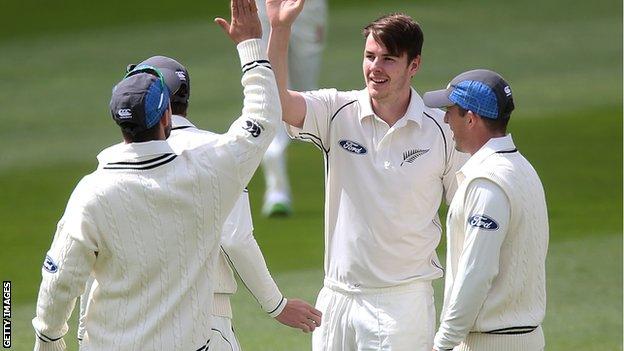 New Zealand wrapped up a 66-run victory over Somerset in their opening tour match despite an entertaining final-day hundred from James Hildreth.

Hildreth advanced from his overnight 62 to score 115 and lower order runs from Craig Overton (25) and Tim Groenewald (47) briefly raised hopes of an upset.

But off-spinner Mark Craig took the last three wickets to finish with 5-34 in Somerset's 277 all out.

New Zealand play England in two Tests later in May.

Somerset, who began the final day on 142-6, lost Josh Davey to the second ball of the day.

But former England Lions captain Hildreth counter-attacked to bring up his third century of the season in an eighth-wicket stand of 72 with Overton.

The partnership was broken when Overton (25) stepped on his stumps attempting to hit Craig to the boundary and the spinner had Hildreth caught behind soon afterwards.

Groenewald kept the match alive in a blistering knock that featured five sixes before he was bowled by Craig to hand New Zealand victory with more than two sessions to spare.

The Black Caps, who are still awaiting the return of several first choice players from the Indian Premier League, take on Worcestershire in a two-day match starting on Thursday before the first Test at Lord's on 21 May.