The New Zealand-born spinner, 35, trapped Alex Gidman lbw for 12 to reach his personal milestone at Edgbaston.

Resuming on 88-2 and chasing 437 for victory, Worcestershire captain Daryl Mitchell (38) and Tom Fell (33) offered resistance until just before lunch.

Both were dismissed in the space of three balls, starting Worcestershire's demise as they were bowled out for 255.

It was Warwickshire's first Championship win of the season following draws with Hampshire and Yorkshire, while Worcestershire have lost three of their four matches since returning to Division One.

A century stand between Warwickshire's ninth-wicket pair of Chris Wright and Boyd Rankin on day three meant Worcestershire's sizeable victory target was always likely to be out of reach, saving the draw appearing their most achievable objective.

Nightwatchman Charlie Morris hung around for more than six overs early on with Mitchell, whose obdurate innings of 38 from 172 balls was ended when Rankin forced him to edge to Rikki Clarke at second slip.

Fell was out lbw in the next over to Patel, who also accounted for Gidman shortly after lunch to leave the visitors 160-6 and staring at defeat.

Wicketkeeper Ben Cox top-scored with 44 but was caught behind to become Patel's fourth victim, and Keith Barker (3-42) had Sri Lanka international Sachithra Senanayake caught at slip to complete victory. 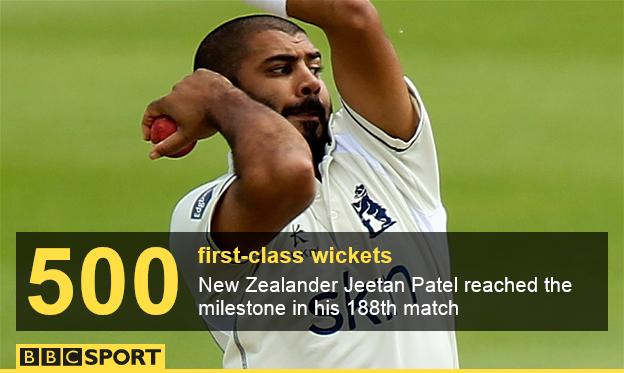 Warwickshire spinner Jeetan Patel: "In the first two matches we played quite well in patches without getting over the line and that was a bit annoying.

"In this game, again we still did not quite hit our straps, but we showed more prolonged glimpses of the way we like to play cricket and we got the result we wanted.

"I was pleased to get to 500 wickets. Before I came to England this year I knew I was pretty close and the main thing was to do the job for Warwickshire and then the wickets would come with that.

Worcestershire director of cricket Steve Rhodes: "They were two costly wickets that we lost just before lunch, as was the loss of Moeen Ali last night. There is never a good time to lose a wicket but just before a session ends is even more important.

"We were put under pressure by the way we batted in the first innings when we were bowled out in 42 overs. That puts you in a very delicate position and it's the real reason why we ended up losing.

"You can't afford to have a bad session in four-day cricket as we have had in the three games we have lost.

"The nature of the game is to wait for the opportunity to get in front and ram it home and that's what Warwickshire did ever so well."