Nick Compton scored his first Championship century of the season to help Middlesex restrict Hampshire's lead to 55 on day three in Southampton.

The former England batsman hit 18 fours all around the wicket to make 117 and steer his side out of trouble at 152-5.

Hampshire's bowlers stuck to their task well with Fidel Edwards (4-100) leading the way, but Toby Roland-Jones' 61 pushed the total to 362 all out. 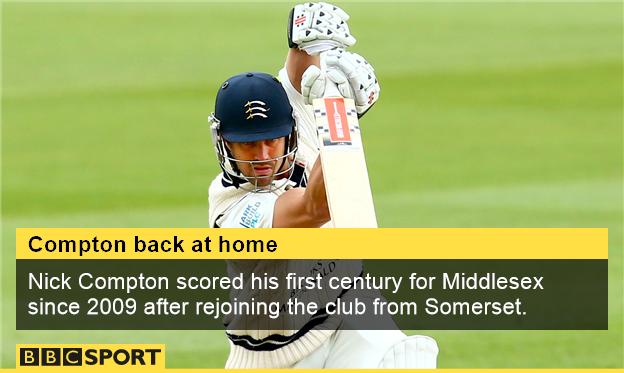 Middlesex began the day on 102-3, but captain James Franklin and Neil Dexter both fell lbw within the first hour to leave the possibility of the follow-on looming.

However, Compton was joined by John Simpson (36) and the two added a patient 59 runs in 32 overs to steady the innings.

A helpful contribution of 29 from Ollie Rayner moved the score along before Dawson trapped Compton lbw to end his near six-hour stay at the crease.

Edwards then produced a lively spell to induce edges from Rayner and James Harris as Hampshire moved towards a healthy first-innings lead.

But a fifth first-class fifty from Roland-Jones, who added 75 for the final wicket with Steven Finn (18 not out) before he was caught at fine leg, ensured Middlesex cut the first-innings deficit to just 51 runs.

Hampshire's openers then survived a brief spell in the fading light before rain forced the close and left a draw the most likely outcome on the final day.

"I think we lost a bit of energy at the end. With Fidel Edwards going off we needed someone else to put their hand up and make it uncomfortable for the last two batsmen.

"It's the last partnership where you've got the technically worse batsmen, but they looked the most comfortable. It's those areas where we've got to do better.

"Overall it's been a good three days for us. A hundred run lead would have left us in a position where we could maybe look at winning the game - I think now it's a case of making sure we have a good first session tomorrow because they have a chance of winning the game."