All-rounder Keith Barker continued his fine match as he took six wickets on day three to give Warwickshire a chance of victory against Durham at Edgbaston.

Barker, on the back of an unbeaten century, ripped through the visitors' middle order with three wickets in six balls before lunch to finish with 4-54.

Paul Collingwood made 68 as Durham were all out for 185 and asked to follow on.

Despite another day which was interrupted by heavy showers, the game continued to be one to remember for 28-year-old Barker who has match figures of 7-109 so far to go with his 102 not out in Warwickshire's first innings.

The away side, who trailed by exactly 400 at the beginning of the morning session, got off to the worst possible start when Calum MacLeod was bowled by Richard Jones (4-48) in the first over.

Left-arm seamer Barker then reduced the visitors to 91-7 with the wickets of Michael Richardson (33), Phil Mustard - for a first-ball duck - and Paul Coughlin.

Collingwood eventually found an able partner in Chris Rushworth as the pair took the attack to the bowlers and put on 58 in just seven overs to steer Durham to 183-8 before Jones returned to bowl Rushworth. 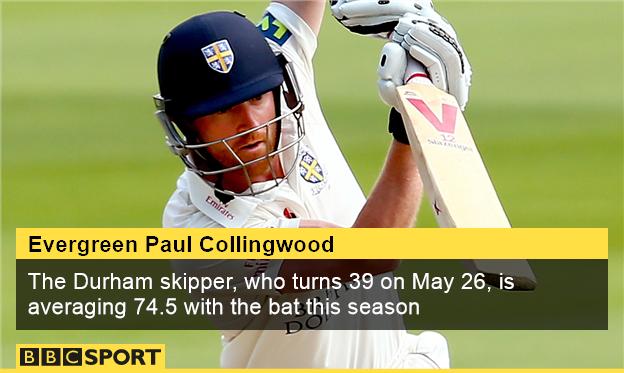 Former England batsman Collingwood was the last wicket to fall six balls later, having struck 10 fours and a six in his 77-ball innings as Durham were left with a 265-run deficit.

Barker continued where he had left off with two early wickets in Durham's second innings, as Keaton Jennings edged him to Rikki Clarke at second slip and Scott Borthwick was trapped lbw.

Stoneman and Richardson steadied things with a fourth-wicket stand of 72 before Barker removed Richardson for 47 moments before the heavens opened and the players were forced off.

Play resumed at 17:15 BST and gave Stoneman the chance to flourish in an innings which contained 12 boundaries, but there was still time for Boyd Rankin to dismiss MacLeod late on.

"It's been a good team performance so far.

"The ball has not swung so much in the second innings but we're happy with our position going into the final day.

"I knew my own chances would be limited when I came here but I just have to be patient."