Middlesex batsman Nick Compton is determined to convince England's selectors to give him a Test recall.

The 31-year-old, who won his last cap in 2013, scored his first century of the season in this week's Championship draw with Hampshire.

"I feel I am the right man for the job and want to prove to the selectors and everyone else out there that I can do a great job this summer."

He continued: "I'm desperately keen to get back in that team.

"It will be a tough summer [against New Zealand and Australia] and you need guys with a lot of fight and ability to get through tough situations."

Compton broke into the England set-up after a prolific domestic season with Somerset in 2012 and scored 479 runs at an average of 31.93 in nine Test appearances.

However, the South Africa-born right hander was dropped after the second Test against New Zealand in May 2013, when he scored one and seven in his two innings. 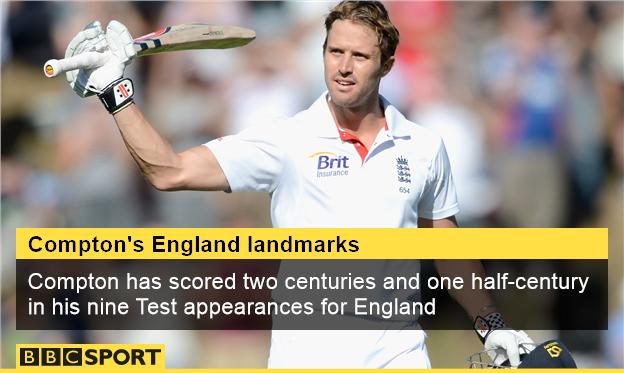 Since returning to Middlesex over the winter, Compton has scored 355 runs at 39.44 in five County Championship matches this summer.

However, following Jonathan Trott's international retirement, England called up 27-year-old Yorkshire batsman Adam Lyth to the side to face New Zealand, denting Compton's hopes of an imminent return to the Test squad.

"I never really understand that. I am 31 and as fit and strong as I have ever been. If I am scoring runs then hopefully I'll have as good a chance as anyone."