There was a moment on the first morning of the first Test against New Zealand at Lord's when England's house of cards looked like it would come crashing down.

In their last Test innings, the second against West Indies in Barbados, they were reduced to 39-5 and lost the match, which meant the series was drawn.

Since then, the England and Wales Cricket Board has sacked coach Peter Moores, appointed a new cricket director in Andrew Strauss and attracted criticism for the way they handled yet another episode in the Kevin Pietersen affair.

At 30-4 on the opening day of the new international summer, it looked as if the naysayers would have another perfect opportunity to circle this vulnerable England team.

But led by Joe Root and Ben Stokes, they showed fantastic character to recover to 354-7 by the close. They displayed the fighting qualities that we all want to see from an England team - it was a very good effort.

We already knew that Root is a fantastic player. At the beginning of the week he was named the England player of the year and, in falling for 98, he just missed out on a fifth century in the past 12 months.

Here he looked in amazing form, best demonstrated by the perfect way he transferred his weight with supreme footwork. Right forward or right back.

I was on commentary for Test Match Special when he first came to crease and said how often the players in good form seem to get bad balls. Actually, he was turning decent deliveries into bad balls because of how well he is batting.

What was more pleasing today, though, was the performance of Stokes. It was a shame that he fell eight runs short of a second Test hundred, but England's decision to push him back up the order to number six was vindicated.

We had such high hopes for the Durham all-rounder after the last tour of Australia, when he was perhaps the only positive England took from the 5-0 hammering.

He performed with the ball, but the standout was a battling hundred on a very difficult Perth pitch against a rampant Australia attack. 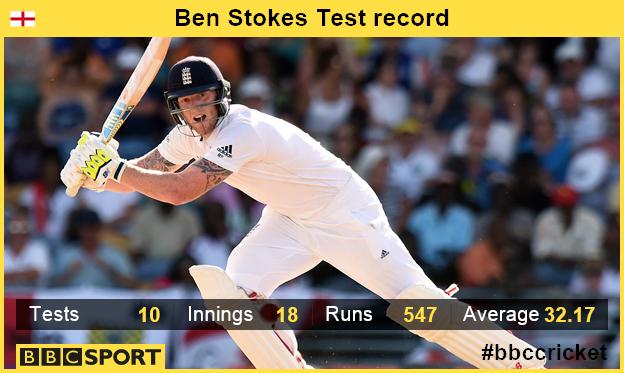 For reasons I can't explain, he lost his way somewhat after that, not helped by a self-inflicted wrist injury, sustained punching a locker.

He has struggled in one-day cricket, failed to fully fire with the ball in Test matches and had to bat at various spots in the lower middle-order.

Stokes is an abrasive character, which we saw in his ongoing battle with Marlon Samuels during the tour of West Indies. The hat-off salute which Samuels gave to Stokes may have provided us all with a laugh, but it may have just given him something to think about.

Now, restored to the spot in which he made that Perth century, he played a fantastic counter-attacking innings, the sort that will get a crowd on the edge of their seats.

He played some classy strokes, not least a number of wonderful on-drives, perhaps the hardest shot in the game. He stood tall, got on top of the bounce and, time and time again, placed the ball past the left hand of mid-on.

Ultimately, he fell in the worst way, playing no stroke to a delivery from spinner Mark Craig that took the off stump.

He will have been terribly disappointed as he reflected on the manner in which he missed out on a hundred, but maybe the confidence he can take from such an innings will transmit to his bowling.

Like with the bat, Stokes hasn't quite produced of the ball with late, partly because of the job he has been asked to do.

England should not demand him to bowl a controlled line and length, but rather ask for pace and hostility. An aggressive bowler who thrills with the bat at number six sounds very much like the role Andrew Flintoff filled for England, and Stokes has the ability to be Flintoff-esque.

The good work done by Root and Stokes was continued by Jos Buttler, who made a very watchful 67.

The England wicketkeeper is a man I really like, not least because he is utterly charming. He loves his cricket and, having met his parents, I can see that comes from a family steeped in the sport.

At Lord's, he showed he is not all reverse sweeps and power, but that he is also capable of playing a proper Test innings.

Though he fell to the last ball of the day, England can still feel happy with their work - not only the total, but the way they fought back.

In removing four of England's top order in the morning session, New Zealand took advantage of a new ball that is likely to provide assistance throughout this match.

However, this pitch is not damp, but rather quite dry and likely to turn as the match continues. Batting last could be quite tricky.

The Black Caps had an excellent morning, but it was England's day thereafter. The tourists may have already missed their chance.