Chris Gayle smashed 92 off 59 balls on his Somerset debut as he led his side to a dramatic three-wicket win against Essex in the T20 Blast at Chelmsford.

The West Indian struck eight fours and six sixes before he was caught at deep mid-wicket off Reece Topley in the penultimate over, but Somerset reached their target of 177 off the final ball.

Gayle started sedately as he made just five off his first 17 balls.

But he then opened his shoulders to bring up his 48th T20 half-century.

Gayle, who arrived in Taunton earlier this week after his stint with Royal Challengers Bangalore in the IPL, is widely regarded as one of the greatest batsman to have ever played Twenty20 cricket.

The 35-year-old holds most of the records in the format, including the highest number of runs with more than 7,500, the most sixes - an astonishing 530 - and his 175 not out is the highest score. 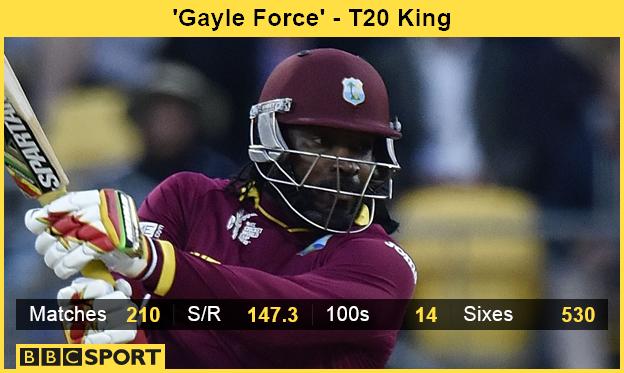 However, he looked far from assured at the start of his innings as he struggled to find any timing in the first five overs, much to the delight of a typically vocal home crowd.

A couple of fours with Gayle's trademark power seemed to spark him into life, but it was not until halfway through the innings he launched his first couple of sixes off Tom Westley, including a slog sweep out of the ground.

It set the tone for the carnage that was to follow as the Jamaican brought up his fifty with another massive leg-side six.

Gayle got a life shortly after reaching his half-century when he was dropped at third man by David Masters and then rubbed salt into the wound by smearing Topley for 21 off the over.

He was racing towards an incredible 15th T20 century after two more huge maximums off Graham Napier, before falling eight runs short - but still received a fine ovation from the home fans.

"I did enjoy it but not at first. At the start I wasn't enjoying it because it was really cold and I was thinking 'it's too cold for me, what am I doing here?' but I stuck it out.

"We started slowly in the batting department. That's the game of cricket. Tres [Marcus Trescothick] got a few boundaries and then got out and I was five runs from five overs.

"I wasn't going to panic and I didn't want to play a rash shot and get out and put the team in a bigger hole.

"Once I stay there I get the runs and it did happen. The guys batted well so I'm really happy with that. A last-ball thriller, it was a fantastic game and I'm thankful to get over the line for Somerset."

"(Chris) Gayle bided his time very nicely. He was slow at the start and we thought we were on top of him but then his class came through.

"It was a great game of cricket and it's one that we're all very proud to be a part of.

"It was a really gritty and dirty game and your passion comes out. More often than not, the side that normally wants it the most comes out on top."