Gurney took a career-best 5-43 as the visitors were bowled out for 150 after being set a target of 310 for victory.

Earlier, Notts all-rounder Samit Patel made exactly 100, his first Championship hundred of 2015, as the hosts reached 243 all out.

Paceman Steve Magoffin finished with 6-50 to end with match figures of 12-159.

The game, which had been dominated by the bowlers bar a couple of counter-attacking hundreds by Patel and teenager Luke Wood in Notts' first innings, continued that way in the morning session.

Resuming on 228-7, Nottinghamshire took their lead past 300, before losing their last three wickets in just five balls. 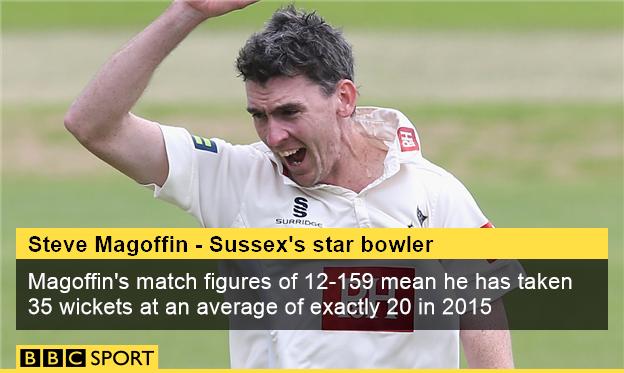 All three innings in the match had seen top-order collapses, and Sussex's second innings followed that trend as they slumped to 49-4 with Jake Ball and Wood claiming two wickets each.

Luke Wright offered a counterpunch with 39 off 38 balls but, when he was bowled by Gurney, the wickets continued to tumble.

Magoffin showed some late resistance with a boundary laden 35, but once his stumps were scattered by Gurney, Ball removed Matthew Hobden in the next over and Notts had their first Division One win of 2015.

"All credit to the team, certain people obviously made major contributions but the whole team has chipped in over the course of the three days.

"It was a dream match for Luke Wood. For a 19-year-old I thought he was absolutely outstanding.

"Jake Ball is at last getting the rewards he deserves for the work he put in over the winter and Harry Gurney has that knack of taking wickets in clusters.

"He bowls quickly, he bowls aggressively and has that wicket-taking ability."

"The game was won and lost really in the first 15 to 30 balls that Woody [Luke Wood] faced on the first day.

"He could have been out to any one of them and then we he went into hitting mode we lost the plot a little bit - but he hit it well.