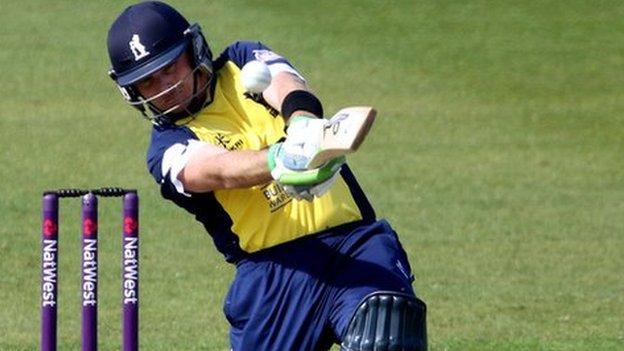 Ian Bell gave a measured response to being left out of England's one-day international squad by hitting his highest score in Twenty20 cricket as holders Birmingham Bears beat Durham.

It helped his side to a third straight North Group win, lifting them to third, within two points of leaders Durham.

"It was nice to get a few in the middle," said Bell, who has hit a sudden barren patch in Test cricket.

Bell gave the Bears the initiative in a second-wicket stand of 96 with William Porterfield, first driving, then pulling successive balls from England colleague Ben Stokes for six.

He then straight drove two fours and guided two more to third man either side of a high full toss, as Stokes went for 21 off the 16th over.

"Hopefully there's more to come," added Bell. "There's quite a lot of T20 in the next few weeks. I'll work as hard as I can to get in form for the rest of the summer."

After making just 55 runs from his last eight Test innings, including a pair against the West Indies in Bridgetown, Bell's aim is to be back to his best by the time this summer's Ashes series starts on 8 July.

By contrast, Durham's one-day skipper Mark Stoneman was concerned more with how his side underperformed in their fifth T20 game in 10 days.

"Ian Bell showed his class," said Stoneman, "but I was a bit disappointed with how we executed.

"The strong wind meant it wasn't ideal conditions for cricket. But we lost our way a bit in the middle of our innings when we lost two wickets."

Calum MacLeod survived a leading edge back to Recordo Gordon on nine to make 41 off 27 balls, while Stokes launched two sixes in his 28-ball 40, but their total of 163-7 was not enough to prevent the Bears recording their fifth meeting win in six Twenty20 meetings with Durham.