Lancashire pace bowler Kyle Jarvis has praised the influence of player-coach Glen Chapple after becoming the leading wicket-taker in first-class cricket this season.

The 26-year-old Zimbabwean took match figures of 9-106 as the Red Rose beat Gloucestershire by 91 runs.

His 5-39 in the second innings took him to 47 wickets so far this summer.

"He [Chapple] helps you focus on what you need to do and it's been invaluable what he's been saying," Jarvis said.

He told BBC Radio Lancashire: "Like in warm-ups, where I'd run in and bowl just to get loose, he's now got me focusing on every single ball and it's paid dividends.

"He's still out there every morning swinging it at 85 mph in the nets, probably bowling quicker than all of us." 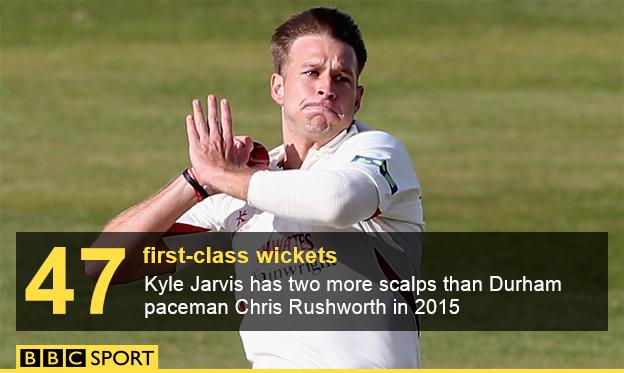 Jarvis' five-wicket haul against Gloucestershire was his third of the season and 11th in first-class cricket.

Meanwhile, 41-year-old Chapple made his first appearance of the season in the win at Bristol and bowled Ian Cockbain out to take him to 976 wickets in first-class matches.

He was in charge of the side last season after Peter Moores became England head coach, combining his captaincy duties with coaching, but moved to a player-coach role when Ashley Giles was appointed director of cricket.