Nottinghamshire off-spinner Matthew Carter took 7-56 on his debut as 18 wickets fell at Taunton.

Earlier, Nottinghamshire's last four wickets fell for 19 as they slipped from their overnight 391-6 to 410 all out with Alfonso Thomas claiming 5-73.

At the close, Notts led by 299 after reaching 89-4 in their second innings.

Notts managed to pick up maximum batting bonus points in the morning despite the clatter of wickets as Tim Groenewald took three wickets and Thomas one.

Wickets continued to tumble in Somerset's reply as they were reduced to 24-2 before Hildreth and Abell dug in and stayed together until after lunch. 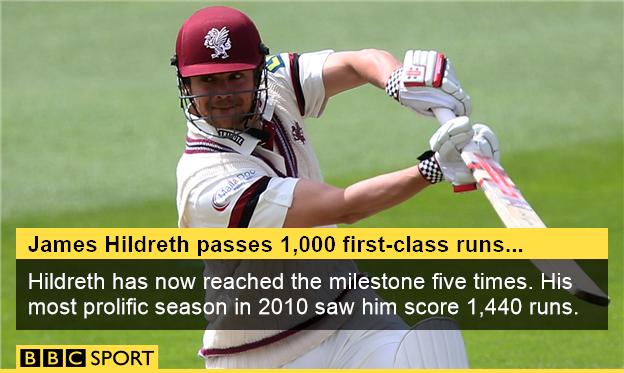 Hildreth however was one of eight home wickets to fall in the middle session of the day with only 21-year-old Abell resisting teenager Carter and his fellow bowlers in an innings which lasted 150 deliveries and 200 minutes.

Notts slowly built on their lead in the final session but Somerset kept chipping away as James Allenby picked up two late wickets.

The day finished as it had started with Riki Wessels and nightwatchman Luke Wood at the crease for the visitors.

"I felt a bit hollow when leaving the field because as a team we didn't get the runs we needed, but now I can look back and reflect that I played pretty well.

"Matt Carter bowled really well, but James Hildreth and I showed what was possible on the pitch if two batsmen get in and we do not feel out of the game after a good final session.

"If we can have a good morning (on Tuesday) and then put some partnerships together it's a match we can still look to win."

"My first ball was a nervous one, but the lads were talking to me and after my first over was finished I felt a lot more confident.

"It's always nice to see a ball turn, especially on day two, and that is a bonus for me because my height allows me to get extra bounce.

"Getting my first wicket was a really proud moment for me, but my best ball was the one that got Alfonso Thomas."