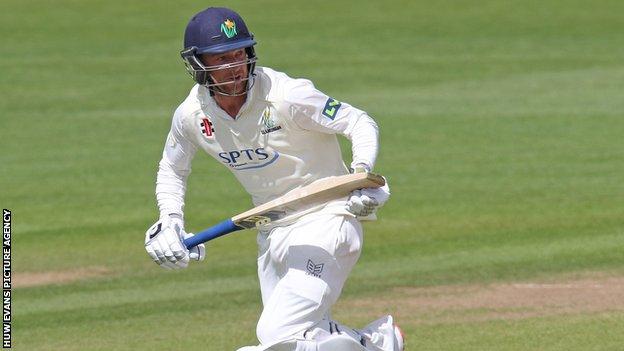 Graham Wagg says Glamorgan's positive batting approach is paying off after a rapid counter-attack against Surrey.

The all-rounder and wicket-keeper Mark Wallace added 152 for the seventh wicket at more than five runs an over.

Glamorgan finished day two of their Championship match at Guildford on 323-8 in reply to Surrey's 406 all out.

"They got early wickets but we did counter-attack them and put them on the back foot," Wagg, who will resume on 116 not out, told BBC Wales Sport.

"That's the way the game's moving forward, you need to be positive."

Wagg's score equals his career-best against Kent at Canterbury in 2014, while Wallace's 92 was his best of the season so far.

Glamorgan's aggressive lower-order fightback was a repeat of their performance earlier in the season against Surrey in Cardiff, when they also looked set to follow-on.

"Craig Meschede has done it twice before for us and got us out of trouble [with centuries], and myself and Mark did it today," Wagg said.

Wallace paid tribute to his partner Wagg as Glamorgan fought back from being 106-6, with Surrey's Tom Curran and Chris Tremlett causing havoc with the new ball.

"Fortune favoured us, Graham played fantastically for his 100-odd not out, I got a few and though I'm disappointed to be short of a hundred we'll take the position we're in," Wallace said.

"There's plenty of runs to be had, hopefully we can get a few more in the morning and put them under pressure with the ball - there's a game to be won."

Wagg needs just a single to reach his career-best after slowing down in the closing stages but joked he wanted to delay buying a celebratory round: "I'm not getting the beers in now, they'll have to wait a day!"