Hampshire were bowled out for just 176 as Middlesex dominated the opening day of their Championship match at Lord's.

The visitors lost four wickets either side of a two-hour rain delay, including captain Jimmy Adams in the first over, as they slumped to 55-4.

Toby Roland-Jones and James Harris then ran through the rest of the order with four scalps each as only Joe Gatting showed resilience with 64 not out.

Hampshire, who are second from bottom in Division One with one win from eight games, got off to the worst possible start when Adams nicked Tim Murtagh's fourth ball of the day behind.

Sean Terry soon followed in the same manner off the bowling of Roland-Jones (4-60), before rain forced the players from the field halfway through the morning session.

When play finally resumed at 14:20 BST, Michael Carberry and James Vince both fell cheaply to leave Hampshire in trouble. 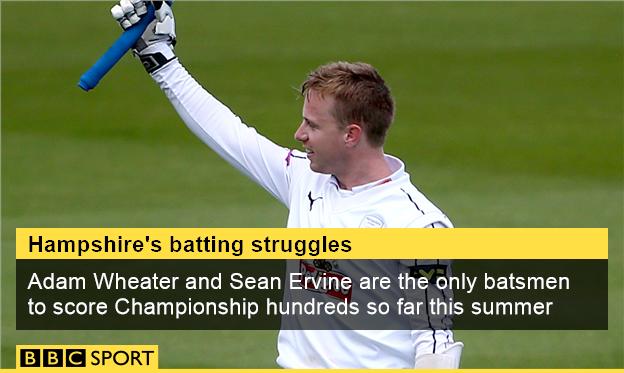 Roland-Jones continued his fine spell either side of tea as he removed Will Smith lbw and had Gareth Berg caught by Nick Compton at gully to leave Hampshire 129-7.

Gatting, playing in his first Championship match of the summer, brought up his half-century by smashing Harris (4-48) for six but the rest of the lower-order folded.

Ireland batsman Stirling and Sam Robson then scored at almost 4.5 runs per over in the last hour to drive home their advantage.

"It's been a tough day on a what is a good cricket wicket and all credit to the Middlesex bowlers who kept the ball in the right areas and bowled with great discipline.

"You couldn't fault their performance today with the ball.

"We were going to bat first anyway if we had won the toss, so the toss didn't make any difference really. We just need to bounce back and hopefully get ourselves back into the game.

"It was nice to do well even though it wasn't the best day for the team."