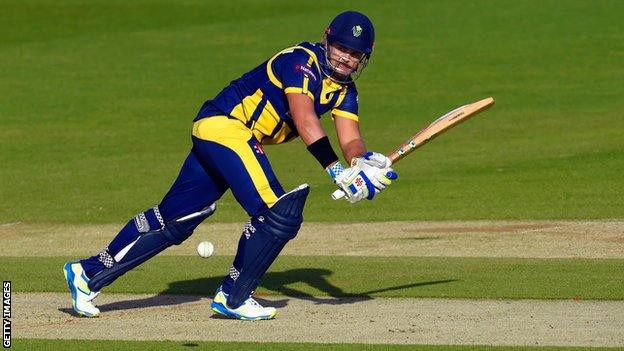 Glamorgan moved above Hampshire in the T20 Blast South Group with their second away win in a row.

Michael Carberry hit six fours and three fours in his 70 as he led the home side's reply.

But Hampshire's challenge faded once he was caught on the boundary by Rudolph with six overs remaining.

Glamorgan move up to fourth in the group two points behind leaders Kent.

Hampshire slip down to seventh but are still only four points off the top.

The Welsh county won the toss and elected to bat at the Ageas Bowl.

Ben Wright (12) partnered Rudolph to help steer Glamorgan to 54-1 after the six power play overs, before falling to Jackson Bird's one-handed catch in the eighth over.

Chris Cooke (2) and David Lloyd (2) failed to form a meaningful partnership with Rudolph who hit eight fours to bring up his half century in 30 balls.

Mark Wallace added 21 to the Glamorgan total before edging Berg to Wheater in the 15th over and the Hants' wicketkeeper also ended Rudolph's innings from a Christopher Wood ball.

Meschede struck two sixes in the remainder of that over and hit further maximums off Yasir Arafat with Andrew Salter (4) and Rhuadri Smith (11) also contributing.

Rudolph used 14 overs of spin to compensate for the absence of fast bowlers Wayne Parnell and Graham Wagg.

After a slow start Carberry hit five fours and a six in his 36 off 20 balls to steer the home side to 47-0 after five overs.

The opening stand of 69 ended when James Vince (28) was caught on the midwicket boundary by Dean Cosker.

At the halfway stage the chase was on with Hampshire 87-1, needing 95 from the final 10 overs.

But from the next ball Rudolph struck trapping James Adams (5) lbw with his leg spin delivery.

Owais Shah (5) went the same way from Cosker, before Smith took the key wicket of Carberry who was caught by Rudolph at deep mid-wicket.

The hosts' run chase petered out as they failed to pick up the run rate following Carberry's dismissal.