Australia fast bowler Ryan Harris has retired from the sport because of a knee injury, dealing the tourists a major blow going into the Ashes.

Harris is replaced in the Australia squad by New South Wales' Pat Cummins.

The 35-year-old missed Australia's final warm-up game at Essex before the first Test against England, which starts in Cardiff on 8 July.

Harris said: "I have had a wonderful career and nothing made me prouder than pulling on the Baggy Green."

He had surgery on his right knee last year and had scans after pulling out of the tour match at Chelmsford.

Harris, who has taken 57 wickets at an average of 20.63 in 12 Ashes Tests, added: "Given the news I received yesterday and after talking it over with my family, I know now is the right time to step away from cricket. 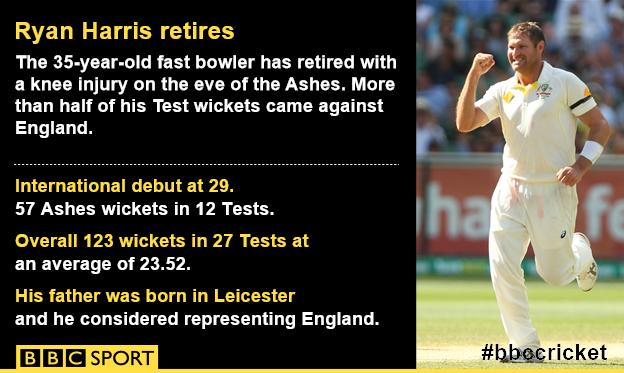 "I played 27 more Tests than I ever thought I would and I have relished every single moment of them.

"Walking away from the team and our support staff is probably the hardest thing to stomach right now. This is a very special team and I know they will do Australia proud in this Ashes series."

Sydney-born Harris has been plagued by injury problems throughout his career and missed Australia's tour to the West Indies before their arrival in England.

Harris, who played for Queensland and South Australia and in county cricket for Surrey, Sussex and Yorkshire, featured in Australia's opening tour game against Kent when he took four wickets.

Former England captain Michael Vaughan claiming Harris would have been Australia's most threatening bowler in the up-coming series.

He played an integral part as Mitchell Johnson's new-ball partner, taking 22 wickets as Australia beat England 5-0 in the last series in 2013-14.

Australia coach Darren Lehmann said: "I was lucky enough to captain Ryan as a grade cricketer, a rookie player and as a state cricketer. He was one of the most talented players I had ever seen.

"Ryan always gave it his all for his country and he epitomises everything the Baggy Green stands for.

"His never-say-die attitude was his signature as he left absolutely nothing on the field each time he played and I think that is something for which he should be incredibly proud."

In the absence of Harris this time, Australia are almost certain to select the left-arm pair of Johnson and Mitchell Starc for the opening Test.

"Am I going to be missed? I don't think I am," added Harris.

"Personally I don't think I was going to be playing the first two Tests anyway, and when you chuck Mitch Johnson in there, with the guys we have got, they can do the job in any conditions."

Josh Hazlewood will be the favourite to take the third seamer's berth after taking 12 wickets at an average of 8.83 in Australia's recent 2-0 victory in the West Indies.

Cummins, 22, took seven wickets on his Test debut against South Africa in 2011, but he has not played a Test since then because of injuries.