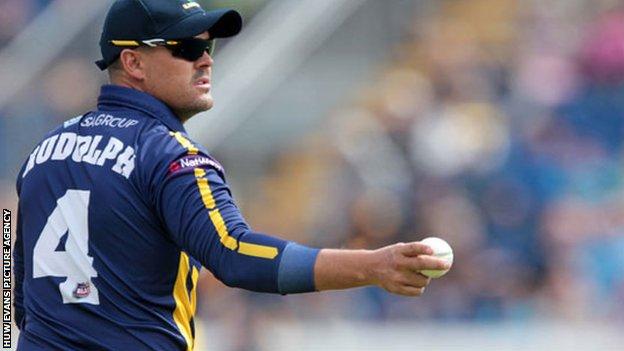 Glamorgan captain Jacques Rudolph hopes his side can continue their winning run in the T20 Blast to reach the quarter-finals.

The Welsh county followed up victory against Somerset with a win at Hampshire on Friday.

Glamorgan are now two points off the top of their group in fourth and Rudolph hopes they can continue their good form.

"Hopefully we can continue [our form] in our last three games," he said.

Rudolph hit 77 off 45 balls in the win at the Ageas Bowl, and also took two wickets.

He described the triumph in Southampton as "awesome" in light of a pre-match injury to all-rounder Graham Wagg and the departure of fast bowler Wayne Parnell.

"We had our backs a little bit against the wall considering we missed two very experienced players," said Rudolph.

"I just said to the guys 'play like we've got nothing to lose' and I think the guys showed it.

"I think it potentially was one of our best [performances of the season]."

Sussex are Glamorgan's next opponents in the competition on Friday 10 July in Brighton.

Before that the Welsh side travel to Chesterfield to face Derbyshire in the County Championship on Monday 6 July.