We are on the eve of the third Ashes series in two years, so England and Australia know each other well.

The last two have had vastly conflicting results - England winning 3-0 at home in 2013, before Australia totally dominated in a 5-0 whitewash some six months later.

Despite losing Ryan Harris, Australia start as strong favourites. They appear to have the momentum and because a drawn series would mean they retain the Ashes, are effectively already one match to the good.

Two years ago, England's exploitation of some very dry pitches was an obvious tactic - they had the off-spin of Graeme Swann and bowlers who could reverse swing the ball.

Now, that is not an option, so I'll be very interested to see what pitches are prepared. One would assume England will continue to prepare green pitches that assist their pace bowlers.

Naturally, that would also help a very dangerous Australia attack, so England's challenge would be out-bowl the tourists. That is where the battle begins.

If conditions do turn out to be helpful to the pace bowlers, then England have to bowl the right length. They simply cannot allow Australia to be better than them in English conditions.

James Anderson, Stuart Broad and Mark Wood have to be prepared to gamble. Lately, we have heard lots of talk about 'positive cricket' and, naturally, we think of aggressive batting. However, it also means attacking bowling.

England must bowl as full as possible, practically half-volley length. Give the ball every chance to swing, challenge the batsmen's footwork.

That is something Australia's Mitchell Starc - who had such a successful World Cup - will look to do, but Starc was rusty in the last warm-up match against Essex and he did not have a successful tour here two years ago.

We know how devastating Mitchell Johnson can be but he can also be erratic, depending on his confidence. Josh Hazlewood, though very impressive in a short career, is on his first Ashes tour.

It is these mini-contests within the wider context of the series as a whole that make the first Test in Cardiff on Wednesday so vitally important.

No trouble at the top

If pitches do favour the pace bowlers, then England's top three are in for a very stiff examination. If conditions are suited to evening out the respective pace attacks, then the performances of the batsmen will go further to deciding the destination of the urn.

Alastair Cook ended the series against New Zealand in the sort of form we have not seen for a long time - he's taking a big stride forward and playing towards mid-off, rather than crabbing across his crease. He has his mojo back.

Though his opening partner has only two Tests to his name, I have seen enough from Adam Lyth to like the look of him. He's a scrapper, and will need all of that fight against an attack who will look to get up him.

Most of the talk surrounding England's batting has centred on Gary Ballance and Ian Bell, who struggled at the end of the series in the West Indies and again against New Zealand.

I don't agree with the theory that England should change the order, not least because most of Ballance's success - he averages in excess of 52 - has come at number three.

He can clearly bat but there are issues about how deep he gets in the crease, giving the bowler more opportunity to move the ball on a full length. England will simply hope he rediscovers the touch that has already yielded lots of runs.

As for Bell, the man of the series two years ago, he has to use all of his experience to lead from the front.

If England's top order does manage to succeed, then Cook and his bowlers have to find a way of removing the world's best batsman.

I've always rated Steve Smith, a man who, by his own admission, first got into the Australia side in 2010-11 to raise morale.

Just because he's fair-haired and bowls a bit of leg-spin, there were comparisons to Shane Warne. The reality is that he's a serious batsman. Yes, he's unorthodox, but his technique has brought him five hundreds in his last six Tests.

But England's plan should not change. Get the ball full, testing Smith's foot movement early on. A couple of drives for four will not matter if an edge comes soon after.

The same goes for all of Australia's top order, some of whom arrive with more questions than Michael Clarke would like.

We know how good the Australia skipper is, how destructive David Warner can be and the rare form that Smith is in, but Chris Rogers and Brad Haddin are in need of runs, a 35-year-old Adam Voges will play only his third Test at number five and there is a decision to be made between Mitchell Marsh and Shane Watson at number six.

England must not allow Australia to find quick answers, so it is crucial they take every opportunity that comes their way. That means taking their catches, because far too many were dropped against New Zealand. 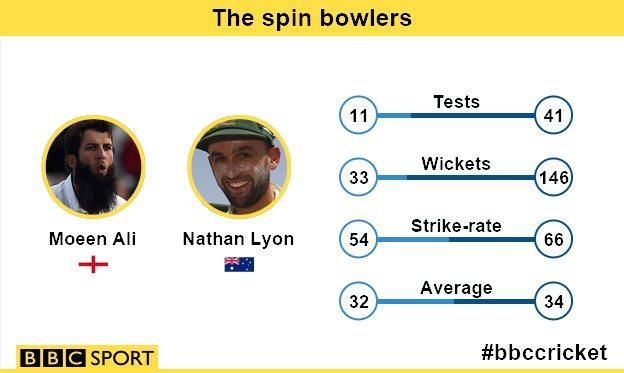 It seems unlikely that either of England's Moeen Ali or Australia's Nathan Lyon will win the series for their teams, but they still have important jobs to do.

Both captains will want their slow bowlers to tie up an end while the fast bowlers rest, bowling maidens, picking up wickets here and there.

It's quite clear Australia's batsmen will go after Moeen, so this will be the biggest challenge of his short career. Cook must handle him correctly, too.

But England should also throw that pressure back on to Lyon, a man who bowled 22 overs for 136 runs in the first innings of Australia's match against Essex.

Every over he is not allowed to bowl is one more in the legs of Starc, Johnson or Hazlewood.

There has been so much talk of sledging and verbal battles in the run-up to this series, possibly because these sides have played each other so much in such a short space of time.

The reality is that the Ashes will not be won by sledging and that England must show their toughness by their performances on the pitch.

The biggest challenge is to stand up to what is more or less the same team that blew them away down under 18 months ago.

There are lots of scars from that tour that could open up very quickly, particularly when Johnson comes roaring in.

In Australia, the lower order looked like they didn't fancy it, so now they have to find the guts and resilience to get behind the ball. They cannot allow Australia to think they are through the England batting once five wickets have gone down.

England have to show the character to stand up and fight. If they get swept aside, they cannot regain the Ashes.