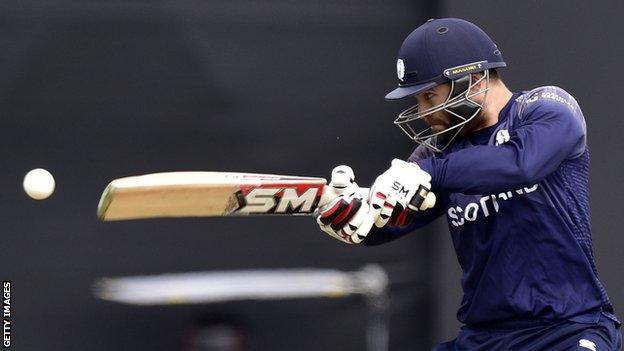 George Munsey hit an impressive 75 as Scotland coasted to a 69-run victory over Jersey in their final warm-up for the World Twenty20 Qualfier.

Skipper Preston Mommsen added 29 not out as the hosts reached 199-5 from 20 overs at Goldenacre, Edinburgh.

After rain, Jersey reached 93-9 chasing a target of 163 from 15 overs adjusted by the Duckworth/Lewis method.

The Scots beat Namibia by six wickets on Monday.

The 14-team World T20 qualifying event will be staged across eight venues in Ireland and Scotland from 9-26 July.

Scotland will host the qualifying tournament's Pool B, with Afghanistan, the United Arab Emirates, Netherlands, Canada, Kenya and Oman competing in a round-robin contest.