England captain Alastair Cook has challenged his players to reignite the cricketing fervour of 2005 when the Ashes get under way in Cardiff on Wednesday.

Cricket has struggled to consistently captivate the nation since England won back the urn in a thrilling 2-1 series victory over Australia 10 years ago.

But Cook believes England have the players to excite the public as they attempt to avenge a 5-0 defeat down under in 2013-14.

"We've got an opportunity," said Cook. "That's the exciting thing. This is the biggest series you want to play in as a player. With Wimbledon going on, it's a great summer of sport and we want to be part of that."

Australia captain Michael Clarke, the only member of the current Australia squad who played in the 2005 series, would happily see those entertainment levels matched, albeit with a different result.

"I'd love to see similar cricket, see the people of England get right behind the series, and the people back in Australia to be glued to their television sets," he said. "Any competitive series like that is great for the game."

For the first time in Ashes history, England will be coached by an Australian as Trevor Bayliss takes full charge.

He inherits a team that have undergone a dramatic makeover since a dismal World Cup campaign and a disappointing drawn series in the West Indies. 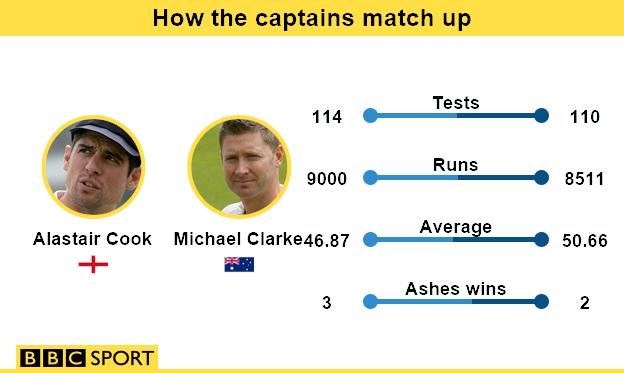 With attacking players such as Ben Stokes, Jos Buttler and Joe Root to the fore, England drew a fast-scoring Test series with New Zealand, before getting the better of the tourists in a one-day contest that set a new record for runs in a five-day series.

Cook, who has been labelled a conservative captain by players-turned-pundits such as Shane Warne, admitted that the nature of the players at his disposal may prompt him to be more aggressive.

"As the leader of a group you do have to change your style of leadership to the players you've got in the changing room and what gets the best out of them," he said.

"There's a lot always written about my captaincy. I think at certain times I have to be able to get on that front foot as well as a captain. When I first started we had a really methodical team, people who liked really banging out areas time and time again and batters who were relentlessly grinding down the opposition.

"The guys we have now are a little bit more free-spirited than that. It's about being able to let them feel comfortable playing their way."

The war of words

Cook and Clarke are under pressure from the International Cricket Council to crack down on their players' sledging after the past two series featured several verbal altercations.

Clarke said he plans to set a better example than he did during the 2013-14 series, when he told England's James Anderson to "get ready for a broken arm" when facing Mitchell Johnson.

"There is a line, and I've made it very clear that in the last series that if somebody overstepped that mark it was me, and as captain of this team I need to be more disciplined," he said.

"For me you don't have say a word to show your intent and play a good brand of cricket. It's not what you say it's what you do and that will be my focus leading into tomorrow [Wednesday]."

Cook added: "People want to see really competitive cricket, both sides giving their all for their country.

"It show how much it means to you. I do believe there is that line in the sand somewhere that everyone knows you can't cross and I hope we can play to that."

While neither captain was prepared to reveal their line-up, Australia captain Clarke said left-arm paceman Johnson is "as ready as ever" as he looks to recapture the form that saw him take 37 wickets in the 2013-14 series.

"He has come into his own and I think he's going to have a fantastic summer," Cook said of the Durham all-rounder.

"He's had a really interesting career, but I think over the last six months he's really matured as a cricketer. Being left out of the World Cup squad really hurt him. He would have said himself he wasn't quite performing as he should have done to earn selection, but we all know how talented he is.

"I like the way he has gone about his business this summer. He trains really hard and understands international cricket better than when he first started."

The venue - memories of Jimmy and Monty

Australia will begin their attempt to win an Ashes series in England for the first time since 2001 at Cardiff's Swalec Stadium, where all 15,000 seats have sold out for the first four days.

The ground also hosted the first Ashes Test in 2009, when England's final pair of James Anderson and Monty Panesar famously batted out 69 balls to salvage a crucial draw and lay the platform for the home side's 2-1 victory.

"It was a tense affair, with Jimmy and Monty hanging in there, but what we did have on last day was fantastic support," said Cook. "The Welsh people really got behind the England team and almost every block Monty pulled off was as loud as when Cardiff or Swansea score a goal. It's a fantastic environment to play in."