Worcestershire bowled out Hampshire on the final morning at New Road to claim a crucial innings and 33-run victory.

The visitors, who resumed on 164-6, still 131 runs adrift, lost Gareth Berg to Saeed Ajmal's third ball of the day.

Eighth-placed Worcestershire move 26 points clear of Hampshire, who remain rooted to the bottom of Division One.

Ajmal, who had only taken three Championship wickets in his first three games after being allowed to return to cricket with a remodelled his action, finished with match figures of 8-100. 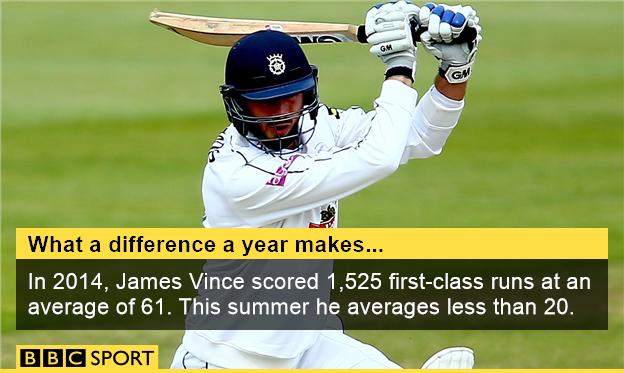 The Pakistan spinner got the hosts off to the perfect start when he bowled all-rounder Berg for 12 in the first over of the day.

Former Sussex batsman Gatting brought up his second consecutive Championship half-century off 118 balls as he and Briggs took the visitors past 200.

However, Ajmal's inspired spell continued to bamboozle the batsmen and he eventually got his reward when he trapped Gatting lbw.

Briggs continued the lower-order resistance with Brad Wheal, but left-armer Shantry returned to clean up Wheal and have last man Jackson Bird caught behind for his third five-wicket haul of the season.

With six games of the season left, Worcestershire are now level on 102 points with seventh-placed Sussex, just one point behind sixth-placed Notts.

Both sides now face a 10-day break before returning to Championship action on 19 July, when Hampshire host Durham and Worcestershire face leaders Yorkshire at Scarborough.

"It was a flat pitch. If anything, you had to watch out for the ball that kept low. They were very wary of Saeed and it's nice that his confidence is really coming back now.

"He bowled some great balls in both innings and he did a fine job for us. His five-wicket haul in the first innings was just the tonic we needed really - but also this morning picking up those two wickets of the better players, that was crucial."

"I'm delighted and very proud of the effort that the team put in. Once again they tried hard and it was nice to keep the momentum going over the four days, which is brilliant really because it means we've got some really good points out of this contest."

"I am massively concerned after our first innings really. I thought our batting was something you would take as a given, being pretty strong.

"In four-day cricket, we need to have a few discussions about where we are going from now. We have got six games left which is a lot of cricket.

"But it does just worry me whether mentally we are good enough to play in this division. When we have been challenged, we haven't really stood up and been counted."