The hosts added 87 runs to their overnight total in 14.1 overs to post 430 all out in a sun-kissed Cardiff and were then rewarded for a disciplined bowling display as Australia slipped to 264-5.

Moeen removed Steve Smith and Michael Clarke to justify his selection ahead of Adil Rashid as England's spinner.

The hosts' dominant display sealed a remarkable recovery from 43-3 on Wednesday morning as they set about avenging a 5-0 Ashes whitewash down under.

Australia, four places above England in the Test rankings, are seeking a first Ashes win in England since 2001. 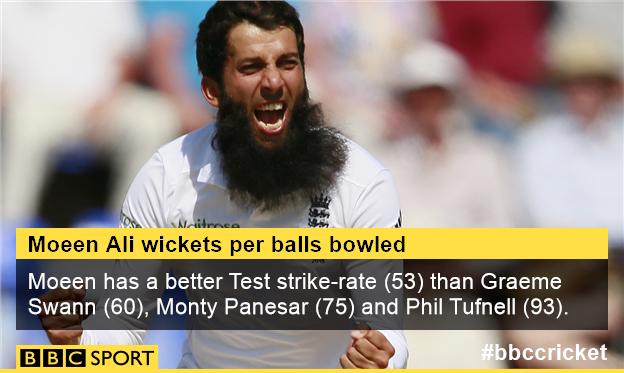 The biggest quandary facing England's selectors before the first Test was whether to select Moeen or bow to the clamour to hand a debut to Yorkshire leg-spinner Rashid.

In the event, Moeen more than repaid the selectors' faith with a fine all-round performance on Thursday.

He added 51 runs to his overnight 26 in a flurry of shots in the morning sunshine before accounting for Australia's two most celebrated batsmen.

Seemingly unfazed by being hit for three fours in four balls by Smith, Moeen tempted the batsman with a flighted ball down the leg side and drew a leading edge, which was expertly caught by England captain Alastair Cook at short mid-on.

Then, just when Clarke was finding his range, Moeen held on to a sharp return catch at waist height to send the Australia captain on his way.

Rogers, who will be 38 in August, continued his excellent Ashes record with a near-faultless 95.

Punching his trademark drives through the off-side and busily nurdling around the wicket, the left-hander shared half-century partnerships with David Warner, Smith and Clarke.

However he was out five runs short of a fourth Ashes hundred when he cut at a wideish away-swinger from Wood and was caught behind.

Rogers shook his head in disbelief and kicked the ground as he became the first player to score fifties in seven consecutive Test innings without converting any into hundreds.

On a pitch continuing to offer little pace or movement off the surface, England's bowlers were rewarded for their patience and discipline.

Sticking to a good or full length on or outside off stump, they invited Australia to go after them and were rewarded with a succession of reckless shots.

Warner was out driving James Anderson on the up and Rogers to a needless cut before Voges miscued a drive straight to extra cover when the close of play was in sight.

Once again, Mitchell Johnson bore the brunt of England's assault on a riotous second morning as he recorded figures of 0-111 - the worst of his Test career.

Mercilessly mocked by the home crowd, Johnson's mood worsened when he was finally awarded a first wicket, only to have it overturned.

Broad was given out caught at short leg off a Johnson short ball, but was sent back to the crease by the third umpire when replays showed Voges's catch had touched the ground.

While Johnson could not buy a wicket, Mitchell Starc continued to pick them up on the cheap.

Despite conceding more runs than his bowling partner, Starc picked up the last two wickets to complete the third five-wicket haul of his Test career.

The state of play

The sight of Nathan Lyon walking sheepishly to the crease for nightwatchman duties after Voges's late dismissal underlined the perception that England have Australia right where they want them.

A first-innings lead of 80 or more would cement their advantage and leave them well placed to set up a push for victory over the weekend.

And although the pitch is offering little pace, its increasingly unpredictable bounce will make batting last on it decidedly difficult for Australia.

England's Moeen Ali told BBC Test Match Special: "In the first innings of an Ashes, it's important that we got 430 - and the way we put the Australia bowlers under pressure.

"We're slightly ahead. A couple of early wickets tomorrow would put them under pressure. I would rather be in our position than Australia's."

Australia's Chris Rogers told BBC Test Match Special: "I started to get some rhythm with my feet and weight. Once you hit some out the middle the confidence comes through. I'm just disappointed I didn't make it count.

"The pitch is a bit two-paced now. You saw with the Adam Voges dismissal that kicked a little. It is going to get harder and harder, but if you set your stall out and you are happy to bat a long time there is still the opportunity.

"It has been an excellent day of Test cricket. England maybe have the slight upper hand but hopefully we can get a few more runs."