Darren Lehmann admits Australia are "disappointed" with Shane Watson's batting problems and says changes will be considered for the second Ashes Test at Lord's on Thursday.

England won the first Test by 169 runs, with Watson twice being dismissed lbw.

He has been out in such fashion 14 times in 35 Ashes innings.

"You don't want to be getting out lbw all the time and you want to make more runs. Shane would be disappointed, so are we," head coach Lehmann said.

"We'll certainly look at the wicket and work out the best XI to win in those conditions and if it means making changes, we'll make changes.

"That won't be an issue for the selection panel. It's going to be a tight call heading into the second Test."

However, he has passed 50 only once this calendar year and he is coming under increasing pressure from 23-year-old Mitchell Marsh who hit centuries in both of Australia's tour warm-up games.

Should Watson be dropped?

Australia will be loathe to make changes and show "any hint of panic", according to Australian broadcaster Jim Maxwell, but there is increasing clamour for Watson, who made his international debut in 2002, to be dropped.

He has become the target of ridicule from England's supporters, with ex-England spinner Graeme Swann noting: "The Barmy Army have a new song for Watson to the tune of the Andy Williams classic 'Can't Take My Eyes Off You', you know that bit where it builds to the chorus? It goes 'lb, lb, lbw'" they were singing it and sure enough Shane got out lbw!"

Geoff Lemon, writing on the ABC website, said: "You sense that Watson's time is up: not because of his critics but because of himself. His confidence is shot. He doesn't look like he's enjoying himself."

Watson's inability to be effective with the ball could finally force Australia's hand.

"One of the reasons he was playing this game, I understood, was because his bowling was going to be so useful in plugging the game up," said Maxwell. "That was barely the case and he didn't get a wicket.

"In two innings he got in for a while but didn't get a score (30 & 19) and his position is in jeopardy. Given the form of Mitchell Marsh with the bat I think the time might be right to move on. "

Who is Mitchell Marsh?

English fans might not know much about Marsh, but he already has four Test caps.

His father, Geoff, played 50 Tests for Australia between 1985 and 1992 while his batsman brother Shaun is also part of Australia's touring party.

"He's a very hard-hitting batsman who can change the direction of the game if he gets in," said Maxwell of Marsh. "He's also a lively medium-fast bowler who can bowl wicket-taking deliveries but doesn't have the control of a Watson and could leak a few runs.

"He's a young, exciting player and he deserves a chance on the evidence of his early form on this tour."

Haddin on his way out? 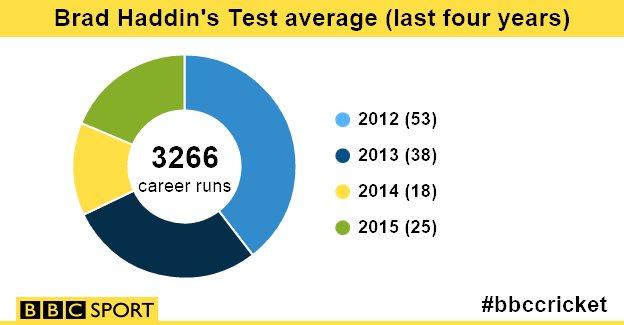 Of the other players to have their place in the team questioned, Brad Haddin is likely to come under the most scrutiny.

The 37-year-old dropped England's first innings centurion Joe Root on nought at Cardiff and failed twice with the bat.

He does, however, have a good record against England - averaging 41 with the bat set against a career average of 33.

Maxwell believes Haddin will be given another chance, saying: "Brad had a bad game but it was all exacerbated by the miss of Joe Root, which probably cost Australia a strong position in the game.

"I actually thought some of his keeping to Nathan Lyon was pretty good but he's also there to make a few runs and he hasn't done that for a while. Another poor game might see them make a change and bring in another very good wicketkeeper, Peter Nevill."

Could Australia make any other changes?

It's unlikely. Now Mitchell Starc is hoping to be fit for the second Test, Peter Siddle is likely to remain on the sidelines.

"Siddle is an option because he bowls pretty straight but I'm not sure he has the penetration of Starc," adds Maxwell. "Elsewhere in the team, Shaun Marsh might push Voges for the number five spot but Voges deserves another game."