All-rounder Shane Watson's omission from the Australia side for the second Ashes Test at Lord's would not come as a surprise, says Cricket Australia communications officer Malcolm Conn.

Watson, 34, has struggled for form and was out lbw in both innings of their first-Test loss to England in Cardiff.

Reports in Australia say he will replaced by Mitchell Marsh for the Lord's Test, which starts on Thursday.

Conn, a leading Australian newspaper journalist before joining Cricket Australia, added: "Over his career, Watson has played around 60 Tests and only made four centuries.

"He is a dangerous cricketer in the short-form game but he has never really adapted to the long form and at the age of 34, and with Mitchell Marsh coming off centuries in successive tour matches, I think the bell is tolling.

"I've heard nothing official and as I understand it the team won't be announced until the toss but it would not surprise me [if Watson is dropped]."

However, Former Australia fast bowler Brett Lee feels it would be a mistake to drop Watson.

"I'm disappointed for Shane Watson," Lee told BBC Sport. "I've played a lot of cricket with him and watched him from the sidelines for the last three years up in the commentary box and he is a game changer.

"He is well-loved by his team-mates and I think they will miss his experience. I would love to see Watson play in this Test at Lord's as I still feel he has a lot to offer."

Australia captain Michael Clarke says that he does not yet know the starting XI for Lord's but says he is looking for an improvement across the team.

"Whoever is picked needs to perform, like the rest of us," Clarke told BBC Sport. "Mitchell Marsh is coming off hundreds in the Tour games. And Shane Watson, if he stays in the team, knows he needs to perform.

"We need a better performance if we are to win this Test match and that doesn't come from just one player." 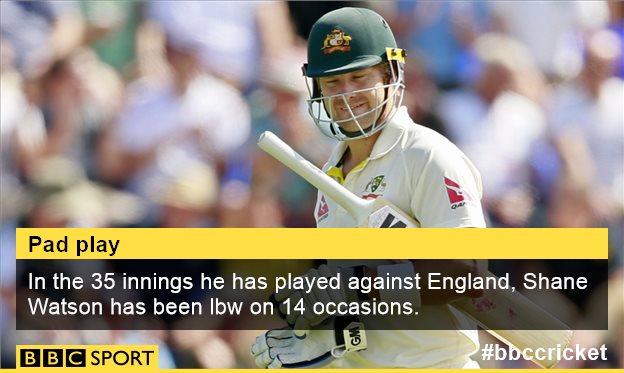 Watson scored 30 and 19 in the opening Ashes Test, which England won by 169 runs, losing his wicket both times to lbw decisions. He has now been dismissed in this fashion 29 times in his career - the most for any Australian batsman in the last 10 years.

A number of newspapers in Australia, including the Sydney Morning Herald, report that Watson will be dropped, suggesting this could spell the end of the all-rounder's Test career.

"A guy at that age, when he's played a long time, when you make a decision like this now, it's pretty much final, there's probably no way back from being dropped now.

"I think the frustrating thing about Shane is you always believe there's more there than he's producing because he looks good when he bats, he's fantastic at first slip, he does a job with the ball, but at the same time you've got someone like Marsh who has got a lot of potential and is probably the future of Australian cricket."