Australia took a giant stride towards levelling the Ashes series as they racked up a huge total and decimated England's top order on the second day of the Lord's Test.

Steve Smith's masterful 215 underpinned Australia's 566-8 declared and laid a platform from which to attack with the ball.

On a pitch that remains slow, Alastair Cook and Ben Stokes spared England further embarrassment with an unbroken 55-run stand but they closed on 85-4, still 481 runs in arrears.

England's deficit reflects two days of complete Australia dominance in response to losing the first Test in Cardiff by 169 runs.

With the comfort of a mammoth total behind them, Australia's pacemen could afford to let rip against England batsmen wearied by nearly two days in the field.

And it took only took two balls to land the breakthrough. Adam Lyth, wafting at a wide away-swinger, edged into the gloves of debutant wicketkeeper Peter Nevill.

Gary Ballance paid a high price for having the cheek to drive Johnson's first ball for four as a 90mph yorker cannoned into his off stump.

Ian Bell was bowled by Josh Hazlewood when he tried to work a straight ball to leg, and Joe Root - so often England's saviour in recent times - edged Johnson behind for one.

With the close of play still 19 overs away, Australia sensed an opportunity to all but wrap up the match, but Stokes counter-punched his way to 38 and Cook dug deep to reach 21 by stumps. 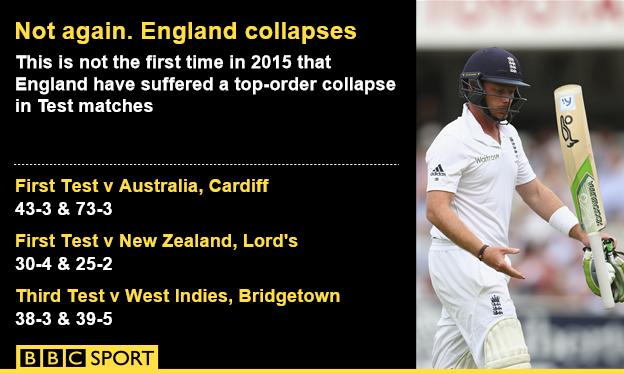 In a textbook piece of pre-Ashes sparring, Stuart Broad had suggested that Smith's promotion to number three in Australia's batting order might play into England's hands by exposing him early to the swinging Dukes ball.

Over the course of more than eight hours of batting at the home of cricket, Smith not only answered any lingering questions but dismissed them out of hand.

The 26-year-old, who began his career as a leg-spinning all-rounder and has batted at every position from three to nine, has now scored six centuries in his past eight Tests, with all of them coming in the first innings of the match.

His 346-ball effort at Lord's saw Australia from 78-1 to 533-6 and could well prove pivotal to the destination of the Ashes urn.

But is there concern over Clarke?

While Smith's curve continues its upward trajectory, Michael Clarke's has been heading in the opposite direction.

The Australia captain made a scratchy seven off 32 balls before looping Mark Wood to square leg.

Since scoring back-to-back hundreds in the last Ashes in December 2013, Clarke is averaging just 31 in 24 innings, a worse record than the ousted Shane Watson, who averaged 34 in 20 innings in the same period.

The solution may be to move the skipper back down to number five, where his average of 61.8 is almost twice as high as his mark when batting at four.

Broad shows he has the bottle for the battle

Clarke was out in the middle of a slight Australia wobble either side of lunch, which briefly gave England hope of keeping their total below 500.

Broad picked up three wickets as Chris Rogers played on for 173, Adam Voges edged a leg-cutter into Jos Buttler's gloves for 25 and Mitchell Marsh was bowled by an inswinger to leave Australia on 442-5.

If the momentum briefly appeared to be shifting England's way, Smith and Nevill snatched it back with a breezy 91-run partnership.

Both fell in quick succession to Root, with Smith pinned lbw in front of leg stump and Nevill driving on the up to mid-off.

When Johnson perished in similar fashion to give Broad figures of 4-83, it was the cue for Clarke to declare and unleash his bowlers on England's fragile top order.

Former England captain Michael Vaughan on Test Match Special: "A fantastic day for Australia; they are all patting each other on the back. Smith and Rogers were outstanding but Starc got things going with that wicket to get rid of Lyth and then there was the Mitchell Johnson factor. They looked like the old Australian side of a few years ago. They had that menace about them again."

England's Stuart Broad on TMS: "There are no demons in the pitch but we had a ropey 20 minutes. We've still got a chance to bat big. We have to apply ourselves. We've got 16 wickets to play with in this Test and if people get in and play to their game plan, they're going to be hard to get rid of."

Former England batsman Geoffrey Boycott on TMS: "It started Australia's day and finished Australia's day. Steve Smith went on in his uncomplicated way and England haven't worked out the best way to bowl at him."

Australia's Mitchell Johnson on Sky Sports: "England will be having a good night's sleep and digging in. Hopefully they'll play that aggressive brand of cricket they've been talking about and we'll see where that goes."

Staring at defeat they may well be, but England can take some heart from the fact they were 30-4 against New Zealand at Lord's in May but recovered to make 389 and went on to win the Test.

A repeat would avoid the ignominy of following on and significantly lift their chances of escaping with a draw.

The weather could also play a part, with heavy rain forecast to hit Lord's on Sunday.