Toast of the nation one week, laughing stock the next. Welcome to the capricious world of the England cricket team.

For the third Test series in a row, they followed a glorious victory with a crushing defeat as a rampant Australia levelled the Ashes at Lord's.

The 405-run mauling punctured the optimism created by England's unexpected victory in the first Test at Cardiff and re-established Australia as strong favourites to retain the urn.

With the third Test at Edgbaston just over a week away, how can England get their Ashes campaign back on track?

England's most pressing concern is a malfunctioning top order, and captain Alastair Cook admitted changes will be contemplated when the selectors meet on Tuesday.

While England's troubled trio were crumbling again in the face of Australia's pace attack on Sunday, Jonny Bairstow and James Taylor were busy compiling hundreds in the County Championship to put themselves in the frame for a recall.

An alternative would be to bring in an opener such as Alex Hales or Nick Compton as a like-for-like replacement for Lyth.

"You've got to ask yourself, would Australia be delighted to see the same top four arrive at Edgbaston? And I would say they would," said former England captain Michael Vaughan.

"In a big series like this, if you start badly, like Adam Lyth, it's so hard to get back in front."

Ex-England spinner Graeme Swann believes it is too early to make changes.

"Just a week ago, we won a Test match magnificently in Cardiff. Now people are panicking because we've not batted well twice at Lord's," he said.

"These guys' jobs are on the line. They have got to go out there and start scoring big hundreds. They are all capable of it - it's more a mental thing than anything else."

If the selectors follow Swann's advice and keep faith in the same team, they may be tempted to at least tinker with the batting order.

England's third wicket has fallen for 52 runs or fewer in eight of their past 14 Test innings, while Ian Bell has scored 116 runs in his past 12 innings at number four.

Bell's average of 33 batting at four is significantly worse than his record at five (48) and six (60).

However shifting the Warwickshire batsman to either of those slots for his home Test would mean a new role for either Joe Root or Ben Stokes, two of the team's most prolific current batsmen. 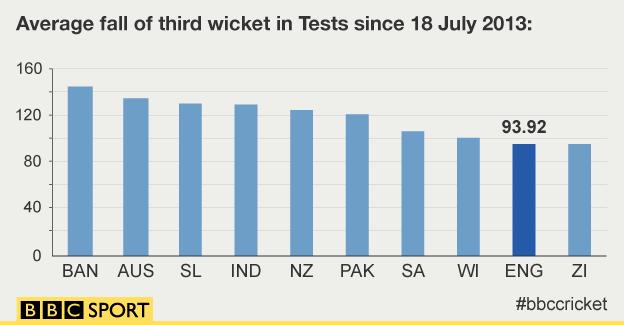 Root's form makes him an obvious candidate to shore things up at number three, but it would be a risky move at such a crucial stage in the series.

The Yorkshire batsman averaged 27 at number three in the 2013-14 Ashes before he was dropped. In his 16 Tests since batting at five his average is 72.60.

"England's best player has found his best niche. Leave him there," said Swann.

"My instinct tells me England will ponder it for a few days and then come up with exactly the same team," said former England batsman Geoffrey Boycott.

"I'm not saying I'm happy about that, but England don't like changing."

If the slowest Lord's pitch in recent memory was a tactic designed to help England and weaken Australia - something Cook has strenuously denied - it had the opposite effect.

In conditions more akin to Lahore than London, Mitchell Johnson, Mitchell Starc and Josh Hazlewood compensated for the lack of pace in the pitch by bowling full and straight, resulting in seven England batsmen being bowled.

England's attack generally persisted with their favoured lines on or outside off stump but, with no assistance from the surface, they were largely neutered.

James Anderson went wicketless for the first time in 59 Tests, while Stuart Broad, Stokes and Mark Wood mustered five scalps between them. 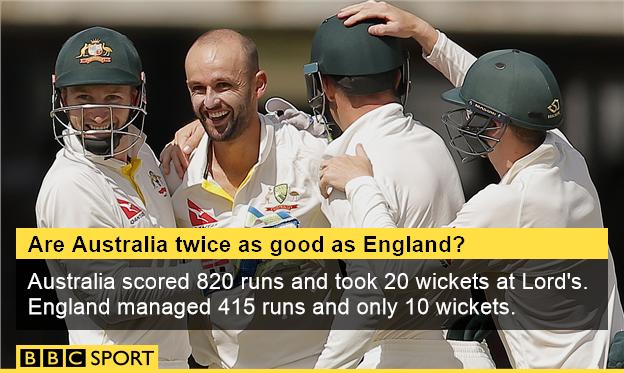 Cook has requested "English wickets" for the remaining Tests, putting the groundsman at Edgbaston, Trent Bridge and The Oval under pressure to provide something for the seamers.

According to Swann, England are unlikely to be able to rely on overhead conditions to get the ball swinging, placing even more importance on the actual nature of the track.

"With the drainage systems at most of the Test grounds, there's not a lot of moisture around so it doesn't swing very much," he said.

"There needs be as much pace as they can get in the pitch. A slow, placid pitch gives the bowlers nothing to play with. That's not how to play to England's strengths."

After taking three wickets in the first innings, Johnson said he hoped he had reopened the scars of the last Ashes series, when he petrified England's batsmen with a fearsome display of pace bowling.

Charging down the Lord's slope on Sunday with his menacing moustache and bulging biceps, Johnson prised open those wounds still further as he took the wickets of Cook, Jos Buttler and Moeen Ali to finish with match figures of 6-80.

Moeen's dismissal, in particular, evoked worrying memories of England's fearful approach to Johnson down under as he recoiled at a bouncer and fended the ball to short leg.

"Moeen is a big concern. He will get a load more of the short stuff now. They will try to bomb him out," said BBC cricket correspondent Jonathan Agnew.

Swann believes England's top order must work harder to protect players such as Moeen by taking the sting out of Johnson and fellow left-arm paceman Starc.

"Those two need to be wearing themselves out against the top order," said Swann. "They wouldn't be nearly as effective if they weren't exposed to the middle order all the time."

After two scores of 33 in Cardiff saw him briefly usurped by AB de Villiers as the world's number one-ranked Test batsman, Smith snatched back the top spot with an imperious 215 in the first innings at Lord's.

In the second innings, he hit 58 off 48 balls to become the first Australian to score a double hundred and a fifty in the same Ashes Test since Don Bradman in 1934. 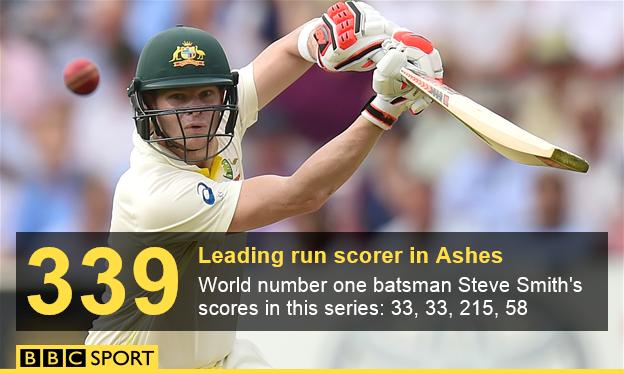 Smith's unorthodox technique belies an exceptional eye for the ball and vast range of shots. But Swann, who questioned Smith's suitability for English conditions before the series, still believes his fidgety style at the crease could be a weakness against the swinging and seaming ball.

"I maintain that when the ball's moving around he won't be effective with his technique," said Swann. "He scored 200 runs because we gave him a wicket he's tailor-made for.

"In Cardiff he scored 33 in both innings, because the ball was swinging and conditions didn't suit his technique."

Difficult though it may be after such a bruising defeat, England and their supporters must try to forget Lord's and move on.

The bare facts state the series scoreline is 1-1 and, as one scribe pointed out, if England continue their recent trend of alternate wins and losses they will win the series 3-2.

The next two matches are at the grounds - Edgbaston and Trent Bridge - where England won the Tests that swung the series their way to win back the Ashes in 2005, while their record against Australia at The Oval reads: won 16, drawn 14, lost six.

"There will be some people sacking half the team but that's not the way to go," said Agnew. "They have got to take a deep breath and remember that they beat Australia two matches ago."

Fill those lungs, pause, and slowly exhale. Whatever happens to this unpredictable England team over the next three Tests, it's sure to be quite a ride.