Sam Hain's century and Jeetan Patel's superb bowling helped Warwickshire to the verge of victory over Somerset at the end of day three at Edgbaston.

Patel (41) resumed in the morning with Hain, who reached his second century of the season with an unbeaten 103.

With Warwickshire 365 all out, Somerset lost three wickets in 14 balls as they slumped to 32-3.

It was an excellent day for bowlers as Somerset's Craig Overton posted career-best figures of 6-74, while Rikki Clarke and Patel took four wickets each for the Bears. 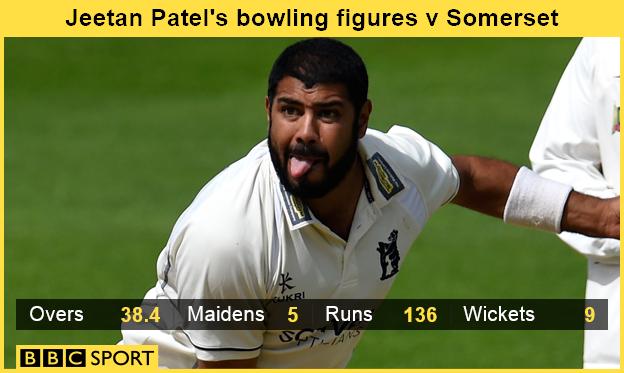 Overton ended the 83-run ninth-wicket stand between Hain and Patel by bowling the latter and then dismissed Oliver Hannon-Dalby with the next ball as Warwickshire finished with a lead of 100.

When Patel trapped Marcus Trescothick lbw, Somerset's collapse started as both Michael Bates and James Hildreth failed to score before falling to Clarke (4-43).

Abell valiantly attempted to trigger a turnaround, carrying his bat and hitting 13 fours in the visitors' second innings, but Somerset's downfall gathered pace and it left Warwickshire a meagre victory target of 71.

"Somerset have got a very good line-up so every wicket was valuable and it was just a case of creating as much pressure as we could.

"Sam Hain batted really well, as he has done time and time again. He is a class act, for his age. He just stays in his bubble and knows his strengths and sticks to them.

"I am enjoying my cricket. I feel fit and feel strong and have had a good rhythm with the ball in both red-ball and white-ball cricket and hopefully that will continue.

"We had a bad defeat to Yorkshire the other week and that performance wasn't good enough so we had to respond to that, and we have done by playing some really good cricket in the next two matches "

"It was a bitter-sweet day for me. It is always nice to score some runs, but you want to be doing it in successful causes for the team.

"The over-riding emotion is disappointment because for the second time in the match we have fallen short with the bat. That is something we have got to work on because it is costing us at the moment.

"It is a pretty good wicket still. They have got one of the best bowling attacks in the country and we just struggled to come to terms with it.

"Jeetan Patel is a quality spinner who caused us problems last season as well but I think we have got to look at ourselves."