Former captain Michael Vaughan has called for Jonny Bairstow to replace Gary Ballance in the England side for the third Ashes Test at Edgbaston.

Ballance has scored 134 runs in eight innings this season, including 14 in the second innings as Australia beat England by 405 runs to level the Ashes.

Vaughan said: "I would just bring Bairstow in and then decide whether you go for Joe Root at number four and Bairstow at five."

Bairstow, 25, hit his fifth century of the season in Yorkshire's County Championship game against Worcestershire on Sunday.

Former Australia bowler Jason Gillespie, his county coach, says Bairstow is a better player than when he last featured for England during the 5-0 Ashes whitewash by Australia in 2013-14.

He added that the amount of instruction he had received during that series in Australia had created "more confusion in his mind."

Gillespie told the Guardian: "Jonny is in a very special place right now.

"His average in the championship this summer has just tipped past 100 with that innings and, given the opportunity, I know he would take it with both hands.

"It is important that those people who don't watch much county cricket don't pipe up with opinions based on his past experience in Test cricket because we're talking about a different beast right now."

Bairstow has played 14 Tests with a batting average of 26.95 with his last appearance coming in Sydney in January, 2014 during the Ashes.

England have 'good players on the outside'

England head coach Trevor Bayliss said there are "some good players on the outside" going into the Test, which starts on 29 July.

As well as Ballance, Adam Lyth and Ian Bell could also be under pressure for a place in the side.

"When you play badly, positions are looked at," said Bayliss, who also hinted there could be room for England's one-day batsmen.

"You maybe don't have quite as many short balls bowled at you in a one-day game. But I think you get confidence from batting well anywhere. If you've got one-day form, there's no real reason you can't turn that into runs at Test level."

Bairstow and Nottinghamshire's James Taylor, who hit 291 in the latest round of County Championship matches, have both figured in the England one-day team in the past year, while Bayliss's comments suggest players such as Alex Hales and 50-over captain Eoin Morgan may be considered.

Hales, once rated as the best Twenty20 batsmen in the world, is yet to play five-day cricket while Morgan played the most recent of his 16 Tests in 2012.

Bayliss is aware of England's top-order frailties and says it will be discussed at Tuesday's meeting.

Lyth, Ballance and Bell scored 56 runs between them in their six innings at Lord's, while their Australia counterparts Chris Rogers, David Warner and Steve Smith amassed 616.

"Two Tests ago they were selected for these first couple because they were considered the best players in the country. That doesn't necessarily change after only four innings," said Bayliss.

"But it's a concern that we are three or four for 40, and they know that."

Both Vaughan and fellow former England captain Graham Gooch believe Bell should be promoted to bat at number three in the third Test on his home ground.

"I would go to Ian Bell and say 'right, you are a senior player, you have played 110 Test matches. That number three position has been a tricky one for us and you have to take it on board and get us out of a problem hole we have been in for the last 14 innings'. 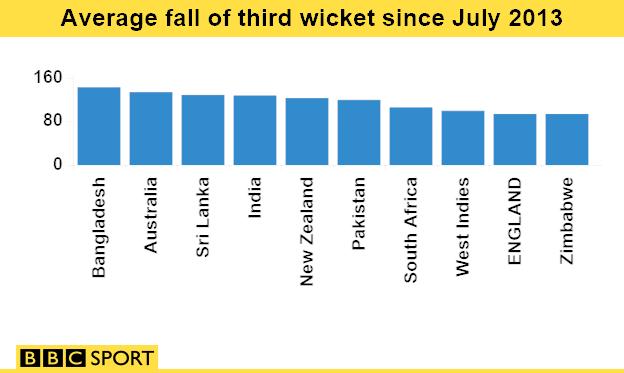 Gooch, who is also a former England batting coach, told the Tuffers and Vaughan Cricket Show: "I would stick with the batting personnel but I have never been in favour of Gary Ballance batting at number three.

"He would be better, if you ask me, at number five. He is a sticker, a grafter, he hangs around and he could be batting a lot of the time with people like Stokes, Jos Buttler and Moeen Ali, who are all aggressive players."