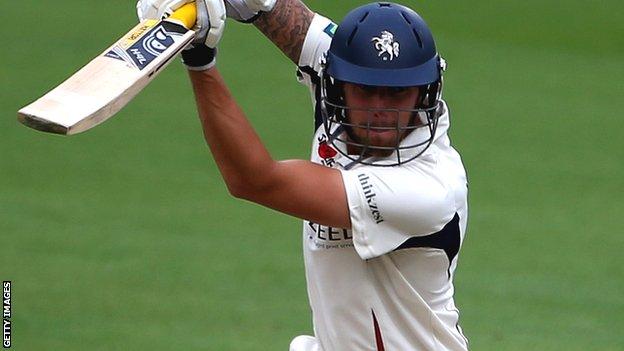 Kent put on a ground record score, with Ben Harmison and Sam Billings making tons, as they beat Essex by an innings and 207 runs with a day to spare.

Their 633-8 total was the highest-ever made at Tunbridge Wells, followed up by skittling out Essex for 166.

Harmison made 123 and Billings 100 not out either side of lunch and, set a big total, Essex were always struggling.

Graham Napier (35 not out) tried bravely but could only delay Essex's heaviest loss to Kent.

Resuming on 420-4, Darren Stevens (76) was the first Kent wicket of the day to fall, but that just brought Harmison and Billings together to put on 99 for the sixth wicket.

Nicholas Browne's dismissal with just one run on the board got Essex off to the worst of starts, and only two other batsmen apart from the unbeaten Napier made it past 25 runs.

Haggett (4-43) and Matthew Hunn (4-47) did most of the damage as Essex were polished off just before the close of play.