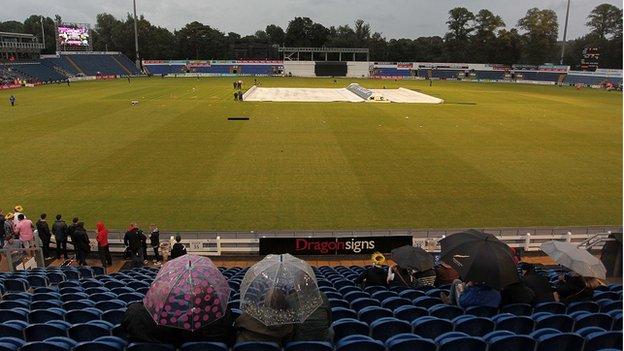 Glamorgan's hopes of reaching the T20 quarter-finals were shattered as they were soundly beaten by Gloucestershire.

A long rain delay meant the match was reduced to five overs per side.

Gloucestershire chose to bowl and limited Glamorgan to 45-1 from their five overs, Colin Ingram top-scoring with 18.

The visitors reached their total with ease, as Chris Dent smashed 28 from 11 balls to seal a comprehensive victory with seven balls to spare.

After matches involving South Group rivals Essex and Sussex were abandoned because of rain, Glamorgan knew only a victory would see them reach the knockout stages.

Gloucestershire, who were already out of quarter-final contention, elected to bowl after winning the toss, and Glamorgan made a punchy start to their innings as Ingram struck a six and two fours in the first over.

James Fuller stemmed the flow of runs with a maiden, before Ingram hit a ball from Kieran Noema-Barnett straight to Dent at long-on for 18 in the third over.

Glamorgan struggled to regain the initiative, with Graham Wagg in particular finding scoring difficult as he faced 12 dot balls before retiring hurt after being hit by a Craig Miles bouncer.

The Welsh county eventually stumbled to 45-1, but made a promising start to the defence of their modest-looking total with two early wickets for David Lloyd.

Michael Klinger was the first to fall, the Australian chipping the ball to Jacques Rudolph, before former England wicketkeeper Geraint Jones chopped on to his stumps.

Benny Howell joined Dent at the crease and, from that point, Gloucestershire steamrollered their way to victory with Dent launching successive Michael Hogan deliveries for six to bring Glamorgan's quarter-final dreams to an emphatic end.