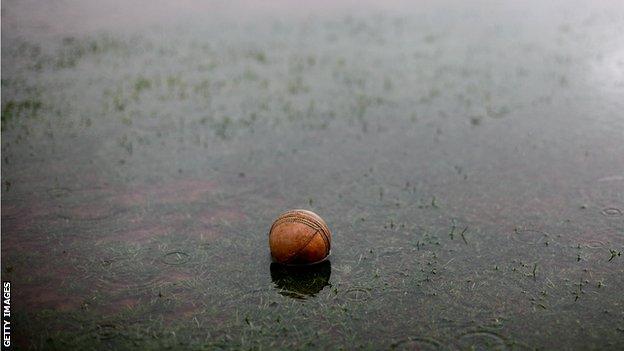 Glamorgan captain Jacques Rudolph was left ruing the rain after their opening One-Day Cup match at Nottinghamshire fell victim to the weather.

Just 90 minutes were played at Wellbeck Colliery as Notts reached 83-3.

"It's obviously disappointing if you consider we are also two points down on the log [after a points deduction]," said Rudolph.

Glamorgan were deducted two points before the campaign after a poor pitch against Durham in August 2014.

"I thought the way we started this morning our bowlers were on song and put them under pressure, I couldn't really have asked more from them," Rudolph added.

"It's a pity we couldn't finish the game, even 10 overs with the bat would have given us an opportunity to win this game."

The pair had put together an opening stand of 164 the previous day in Notts' win over Warwickshire on the same ground, but were both caught attempting big hits.

Smith was opening the bowling in the absence of Graham Wagg, who is recovering from concussion after a blow on the head against Gloucestershire.

"There was a bit of luck involved but you get bad luck and good luck so I was pleased to get them both," said Smith.

"I've done it opening for the seconds and quite a bit going up through the age-groups, so I'm used to taking the new ball. I do enjoy it and it's the best time to bowl."

Hogan then had James Taylor caught behind, before Brendan Taylor and Samit Patel put together an unbeaten stand of 60.

Captain Rudolph backed the efforts of Smith after the 20-year-old's performance.

"I'm very happy for Ruaidhri, it's giving him a bit of responsibility up front with the new ball with Waggy out," Rudolph said.

"He also bowled against top-end batters so I think for him it would be a good experience and a good learning curve."

Glamorgan now face a series of home games against Kent, Essex and Hampshire within the space of six days at the SSE Swalec Stadium, beginning on Tuesday, 28 July.