England bounced back from their Lord's humiliation to seize control of the third Ashes Test in an astonishingly one-sided first day at Edgbaston.

Feeding off the passion of a boisterous crowd at the venue where they famously ignited their 2005 Ashes campaign, England bundled out the tourists for 136 on a seaming pitch and reached 133-3 at the close.

A potent James Anderson took his best Ashes figures of 6-47, and Steven Finn marked his first Test appearance for two years with the wickets of Steve Smith and Michael Clarke after Australia had won the toss and chosen to bat.

On a day punctuated by short rain delays, the mood of England and their supporters was lifted further still by the sight of Ian Bell flaying the Australia attack around the ground under floodlights in the evening session.

Five balls after reaching fifty, however, Bell tossed his wicket away with a needless heave at Nathan Lyon that took a fraction of the gloss off England's near-perfect day.

Despite Bell's frivolousness, England were unrecognisable from the meek outfit that had been bowled out for 103 on the fourth day of the Lord's Test as Australia romped to a 405-run victory.

The tourists, whose innings duration of 36.4 overs was two balls fewer than England's at Lord's, will rue some injudicious shots from their middle order.

But on a pitch offering just enough sideways movement and carry to assist their bowlers, England put themselves well on course to take a 2-1 lead in the series with two matches to play. 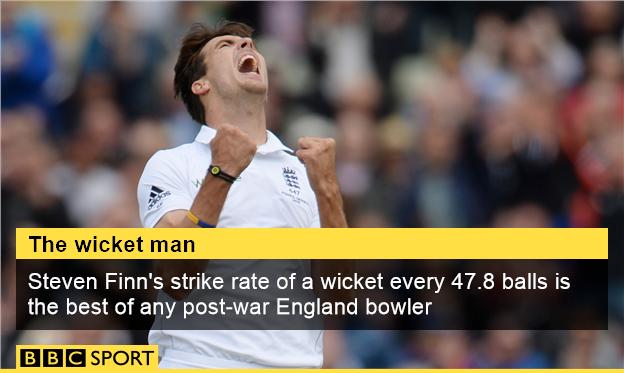 An ankle injury to Mark Wood gave Finn the opportunity to play Test cricket for the first time since he was dropped after the first Ashes Test in 2013 and later sent home from the 2013-14 tour down under, having been deemed "unselectable" by then coach Ashley Giles.

Some 18 months later, on an overcast morning at Edgbaston, Finn was closer to unplayable as he accounted for Smith and Clarke inside his first three overs.

Smith was caught behind for seven off a gem of a delivery which moved away off the seam, while Clarke was bowled by a superb yorker for 10, making it eight innings since the Australia captain last passed fifty.

Looking every inch the bowler who in 2011 became the second fastest Englishman after Ian Botham to take 50 Test wickets, Finn continued to unsettle the Aussie batsmen with sharp, short balls and fuller deliveries that had them groping outside off stump.

With Finn softening up the Australia batsmen from one end, Anderson began knocking them out from the other.

In an extraordinary spell of seam bowling after lunch, the Lancashire bowler - who went wicketless at Lord's - took 4-7 in 19 balls to leave Australia in ruins on 94-7.

Adam Voges and Mitchell Marsh were both caught behind, Peter Nevill was bowled without playing a shot and Mitchell Johnson edged to fourth slip.

England's dismissals featured a mixture of bad luck and recklessness on the batsmen's part.

Adam Lyth fell firmly in the latter category as he swiped at a wider ball from Josh Hazlewood and was caught in the slips.

Alastair Cook added 57 for the second wicket with Bell, but fell in bizarre circumstances when a full-blooded pull off a Lyon long-hop somehow lodged in the arms and belly of Adam Voges at short leg.

Bell, promoted to three after Gary Ballance was dropped, delighted his home crowd as he drove and pulled his way to a half-century off 51 balls.

But his attempted assault on Lyon failed miserably as he lost control of his bat and ended up with it dangling from one hand as David Warner ran back from short midwicket to take the catch.

England bowler James Anderson: "We're very happy, especially after losing the toss. We created pressure to get them out for a low score and then the guys batted well. There was a large percentage of bad shots from them, but Chris Rogers was watchful and then put away the bad ball.

"Steven Finn has had a tough 18 months and worked so hard to get back in the Test side, so everyone in the dressing room is delighted for him and he looked a threat."

Australia opener Chris Rogers: "It was a very disappointing day. England put us under pressure and we didn't respond. You have to give their attack credit, but there's times when you have to fight, and some of the shot selection...we needed to have a better day.

"The pitch was quick enough and England exploited it well and hit the right lengths. It could be difficult in the fourth innings, but we're behind the game at the moment." 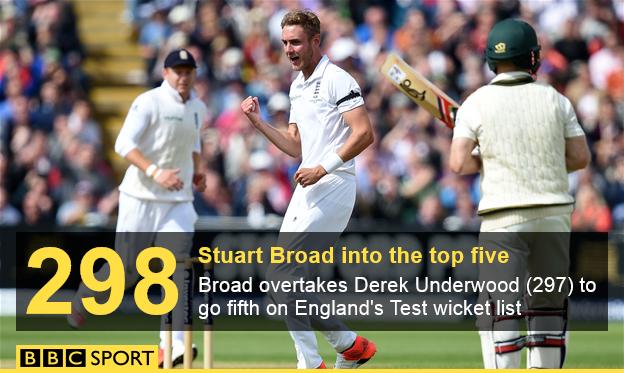 England's plan could not be simpler. Bat for as much of Thursday as possible and build as big a lead as possible to truly underline their supremacy.

And with the weather set fair for Thursday and Friday, fans with tickets for the weekend may already be wondering how much cricket they will see.

The match is carrying echoes of 1997, when Australia won the toss and chose to bat on the first day of the first Test at Edgbaston but were skittled out for 118.

A Nasser Hussain double hundred and Graham Thorpe's 138 gave England a 360-run first innings lead, and although Australia made 477 in their second innings, Alec Stewart and Michael Atherton steered England to a nine-wicket win.

The good omens end there for England fans. Atherton's side did not win another match until the final Test at The Oval, by which time the Ashes were safely in Australia's hands.