Steven Finn took a five-wicket haul as England moved to the brink of victory over Australia on another barely believable day of Test cricket at Edgbaston.

The Middlesex fast bowler continued his remarkable resurgence as England tore through Australia's batting for the second time in as many days on a sun-kissed Birmingham afternoon.

Only David Warner's swashbuckling 77 and Peter Nevill's gutsy 37 not out off 117 balls spared Australia the ignominy of a two-day defeat but the tourists are perilously poised on 168-7, 23 runs ahead of England with just three second innings wickets in hand.

England, who earlier scored 281 all out for a first innings lead of 145, with Joe Root scoring 63 and Moeen Ali 59, will now expect to wrap up a victory inside three days that would put them 2-1 ahead in the series with two matches to play.

Alastair Cook's men must triumph outright to win back the Ashes, while Australia only need to draw to retain the urn.

The sole negative from England's point of view was the sight of James Anderson leaving the field mid-over in the evening session to receive treatment on a tight side.

Setting about the business of bowling out Australia midway through the afternoon session, England made an early breakthrough when Stuart Broad removed Chris Rogers lbw for six to reach 299 Test wickets.

But where there is Warner there is danger. The left-hander's 35-ball half-century - equalling Graham Yallop's record for the quickest Ashes fifty - saw Australia race to 62-1 and threaten to make major inroads into England's lead.

A clever piece of captaincy from Alastair Cook turned the tide England's way.

After Finn's first over went for 14 runs, Cook responded by switching him from the City End to the Pavilion End, and his decision brought immediate reward.

For the second time in the match, Finn dismissed Steve Smith, with the Australia batsman top-edging a pull shot high into the Birmingham sky and leaving Jos Buttler with the straightforward task of watching the ball into his gloves.

Better was to follow for Finn and England after tea as the Middlesex fast bowler ripped through Australia's middle order with three wickets for 12 runs in 17 balls.

Anderson, whose 6-47 on the opening day set England rolling, then took the crucial wicket of Warner, who looped a catch to cover off a leading edge to leave Australia on 111-6.

With nearly two hours remaining in the day's play, Australia were staring at a two-day defeat.

But a partnership of 42 between Nevill and Mitchell Johnson extended deep into the final session and ensured England would have to bat again.

Finn, whose 5-45 was his first five-wicket haul since March 2013, showed his golden touch once again, when he had Johnson caught at backward point for 14.

But wicketkeeper Nevill, whose retention ahead of Brad Haddin has reportedly caused disquiet in the Australia camp, found another willing ally in Mitchell Starc as they battled through the final 8.5 overs of the day. 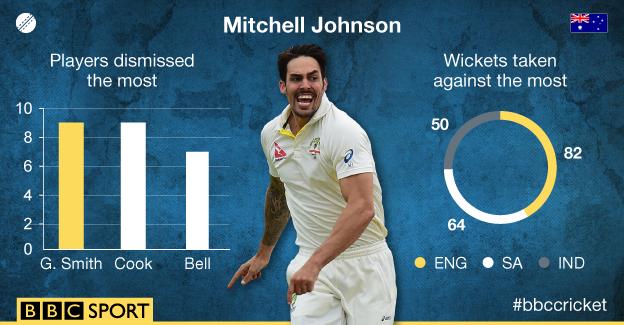 Australia had actually made the perfect start to the second day when Mitchell Johnson removed Jonny Bairstow and Ben Stokes in the space of three balls to pass 300 Test wickets.

Both deliveries were short, fast and rearing up towards the batsmen's throat, and were gloved through to Nevill.

When 145-5 became 190-7 as Joe Root and Jos Buttler fell in quick succession, Australia were back in the game, only for Moeen and Broad to swing the momentum back England's way.

Their counter-attacking partnership of 87 off 117 balls featured 14 boundaries, 11 from the blade of Moeen, who reached his fifty off 66 balls.

By the time both were dismissed in successive overs from Josh Hazlewood, Australia's downbeat body language told of a side who knew they were beaten.

England bowler Steven Finn: "It has been a while since I've played Test cricket so to come here and take wickets was great. The rhythm was good. When you've played a fair bit of cricket you try to treat it like another game. It obviously isn't and it is tiring but it has been a good day.

"The game is definitely not won yet. They have players who can bat. There will still be pressure and we need to do a professional job tomorrow."

Australia bowler Mitchell Johnson: "It's not ideal, it's not something we're happy about. We're 23 runs ahead and we need a big partnership in the morning to get the ball rolling. We played some shots we didn't need to and the guys will be disappointed. We need to stop this rot.

"It looked at one stage like we wouldn't make them bat again. If we can get to 120 or 130 ahead we'll have a really good crack at them." 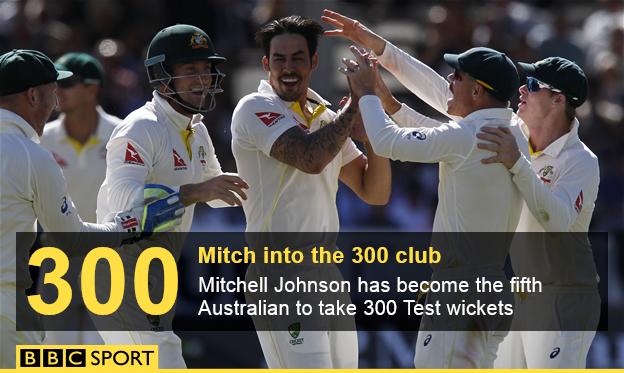