England completed a crushing eight-wicket victory over Australia to take a 2-1 Ashes series lead at a jubilant Edgbaston.

Ian Bell led the way with 65 not out and Joe Root chipped in with an unbeaten 38 as the hosts chased down 121 in 32.1 overs to win with ease on the afternoon of the third day.

Australia's last three wickets had added 97 runs as they were bowled out for 265 to leave England a testing target, with Steven Finn completing a Test-best 6-79.

But the hosts overcame the early loss of captain Alastair Cook for seven to clinch the victory that moves them within one win of claiming back the Ashes urn.

England's three-day victory capped an incredible turnaround since their 405-run hammering in the second Test at Lord's.

And for Bell, half-centuries in both innings on his home ground were a fitting retort to those who were calling for him to dropped after a run of low scores.

The Warwickshire batsman had cracked five boundaries from his first eight balls from Mitchell Starc when he offered his only chance.

An edge off the left-arm bowler flew towards second slip where beleaguered Australia captain Michael Clarke dropped a routine catch.

Starc had earlier bowled Cook with a fast, full away-swinger before Josh Hazlewood upped the pressure on out-of-form opener Adam Lyth by pinning him lbw for 12.

From 51-2, Root dispelled fears of a wobble by cutting his first ball for four and England hardly looked back.

As the tea interval was delayed, Australia resorted to bowling wide outside off stump in an attempt to induce errors by preying on England's impatience.

But with a sell-out crowd of 24,500 singing songs and cheering every run, Bell and Root calmly closed in on the target.

After Bell's single had levelled the scores and brought in the field, Root flicked the winning runs through a gap on the leg side before leaping into the air with fists clenched and engulfing his batting partner in a bear hug.

England's day had begun with the deflating news that James Anderson's side strain will rule him out of next week's fourth Test at Trent Bridge, and the home crowd's mood remained subdued as Peter Nevill and Starc lashed five boundaries in the first four overs of play.

Nevill should have been out for 53, brilliantly caught down the leg side by Jos Buttler, but England's lack of remaining reviews cost Stuart Broad what would have been his 300th Test wicket.

Nevill's next swish at a leg-side delivery brought his downfall as a thin edge was expertly taken by Buttler to give Finn, who enjoyed a fine match on his return to the side after a two-year absence, his sixth wicket.

The ninth wicket added another 28 runs as Starc, with some lusty cover drives, passed fifty for the fifth time in Tests. But a superb diving slip catch by Root accounted for Hazlewood and gave Ben Stokes his first wicket since the first innings of the Cardiff Test.

From then on, the volume was rarely below maximum as the crowd cheered England to a glorious Ashes win.

The fourth Test starts next Thursday at Trent Bridge - and England will be without James Anderson.

With a 2-1 lead, victory in Nottingham would see England regain the Ashes irrespective of the outcome of the fifth Test at the Oval on 20 August.

A victory for Australia next week would mean that, with the series level at 2-2, the tourists could retain the Ashes just by drawing the final Test. Ashes tradition states that in the event of a drawn series, the holders retain the urn.

England captain Alastair Cook: "The Edgbaston atmosphere is unique and it was as loud as I can ever remember it. The way Jimmy [Anderson] bowled in that first innings was fantastic, but I don't think it was a 140-all out pitch.

"It's been an amazing comeback from Steven Finn. Standing there at slip, you thought he was going to get a nick every ball. The character he has shown to come back after a lot of hard work is incredible."

Australia captain Michael Clarke: "It's very hard to explain. Credit has to go to England, they bowled well on day one and we didn't bat anywhere near we'd have liked. I still would have batted first, you can see the wicket has deteriorated.

"It swung and seamed throughout the whole game. We probably had the best batting conditions, we just didn't execute with bat and ball."

England bowler Steven Finn: "This week has been fantastic and I'm thoroughly enjoying Test cricket again. There were a few nerves in the first few balls and you question yourself but after that it was focusing on getting people out.

"It is as nice a feeling as I have ever had taking a wicket [dismissing Steve Smith in the first innings]. It is the most I have ever celebrated a wicket. I did doubt at times if I'd play again but knew I could be good enough again. To be stood here now, there is no better feeling." 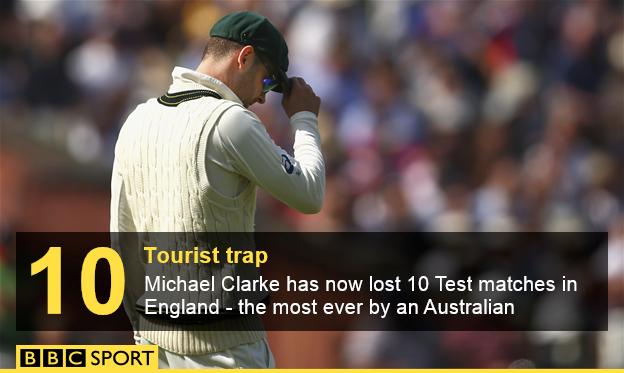